Again today, we have to "mess" with a suggestion been claimed from different but acknowledged and revered subgenres of Metal. Being receiving he same fate as Pentagram and Exodus (having formed much earlier than their first release) are renowned today as pioneers in either Doom or Stoner Metal, celebrating this year, one of their albums turning 30, amongst other bands already suggested through Kokdi’s blog, of course… The scriptures state: «Trouble is an American doom metal band noted as one of the pioneers of their genre, alongside bands such as Candlemass and Saint Vitus.[2] The band created a distinct style taking influences of the British heavy metal bands Black Sabbath and Judas Priest,[3] and psychedelic rock of the 1970s. A critically acclaimed group, their first two albums, Psalm 9 and The Skull are cited as landmarks of doom metal. To date, Trouble has released eight studio albums. Although the band never officially broke up, Trouble was plagued by extended inactivity after their original singer Eric Wagner left in 1997. He eventually rejoined in 2000 before leaving again eight years later. 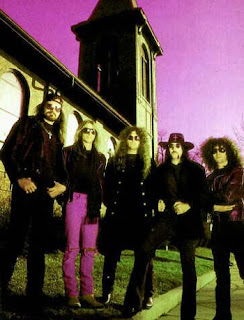 The nucleus of the band had been vocalist Eric Wagner, guitarists Rick Wartell and Bruce Franklin, and drummer Jeff Olson. The band is also noted for the spiritual nature of their early lyrics; their first record label, Metal Blade Records, marketed the band as "white metal" (in contrast to the rising black metal movement) in the 1980s.[4]
Trouble was formed in 1979 by Rick Wartell and was joined by guitarist Bruce Franklin, vocalist Eric Wagner, bassist Tim Ian Brown (not to be confused with lead singer of English band The Stone Roses), and drummer Jeff Olson. Ian Brown was replaced by Sean McAllister in 1983. Drawing from Black Sabbath for inspiration (with occasional nods to the psychedelic sounds of the late 1960s), the band used gloomy down-tuned riffs and spiritual, often openly Bible-inspired lyrics, which led Metal Blade to market the band as "white metal" as opposed to black metal.[5] "I was brought up Catholic", vocalist and primary lyric writer Wagner explains in the liner notes of Psalm 9 re-issue (2006), "but you have to remember, back in the early 1980s, all the metal was kind of satanic, and I did not get into that vibe." Wagner has implied that Metal Blade actually came up with the term in the first place, which the band rejected: "I think it was more like Metal Blade trying to be cute or something, with everything [satanic metal] being called black metal, why not call us white metal, which is a bunch of crap."[6] 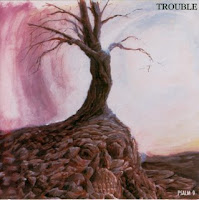 The band toured throughout the Midwest during the early 1980s before signing with Metal Blade Records and releasing their eponymous debut (later referred to as Psalm 9) in 1984. The Skull followed in 1985 and reflected singer Wagner's struggles with substance abuse as well as growing turmoil within the group. A three-year hiatus occurred before the band was snapped up by Rick Rubin's Def American Records for whom they recorded a second self-titled album (Trouble) in 1990 with Rubin producing. More experimental than previous efforts, the album (featuring new drummer Barry Stern, formerly of Zoetrope) expanded upon the group's tentative psychedelic notions within its traditional use of power chords.
The group embarked on a year-long tour before returning to the studio. In 1992 Manic Frustration was released, delving into Beatlesque psychedelia and featuring some of Trouble's most aggressive, energetic performances ever.»
Let us not waste no more time and Present one of the pioneers of Doom