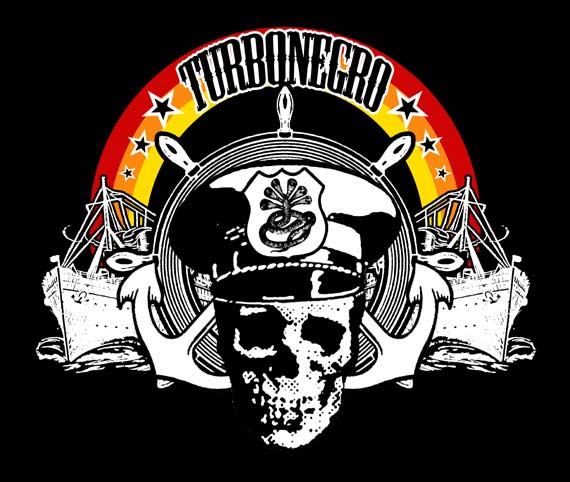 It is time to complete another “triangle” of Suggestions. Since we finally suggested the Dolls and already having covered their metallic off springs it is time to proceed with a band that took the glam-drag show of the Dolls to new level of extreme. Their ferocious attack on conservatism is relentless and unending pushing their dress-code closer to that of the Disco YMCA band than any other rockers while playing inspiring garage punk with sexually explicit lyrics specially designed to attack homophobes anywhere 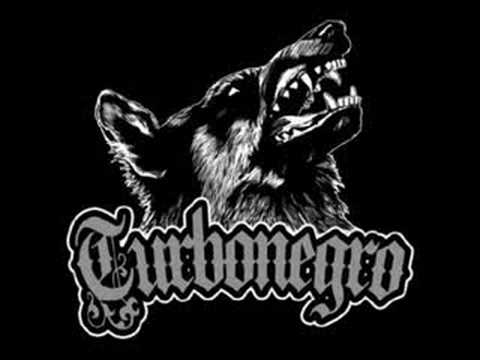 Experts have to say about this band from Norway: «Turbonegro (Turboneger in Norway) is a Norwegian punk rock band, initially active from 1989 to 1998, then reformed in 2002. Their style combines glam rock, punk rock and hard rock into a style the band describes as "deathpunk".
Among the band's main influences are Black Flag, Rolling Stones, KISS,[1] Venom, Radio Birdman, AC/DC, Iggy Pop & James Williamson,[2] Circle Jerks, David Bowie, Electric Frankenstein, Ramones, The Lewd, Hanoi Rocks, Alice Cooper, Negazione,[3] The Dictators and The Stooges.[4] 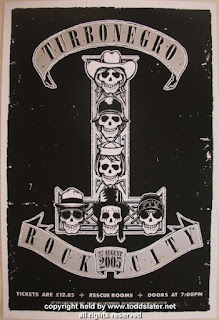 Turbonegro's lyrics often attack political correctness. For example, the cover of the single "Bad Mongo" depicts Adolf Hitler as mentally retarded, and in the song "Hobbit Motherfuckers," they complain that there is "not enough suffering" and "not enough natural selection". Their genre of punk has been self-described as deathpunk. The band has stated that their music superseded existing genres, so they dubbed it "deathpunk" as a way to avoid being pigeonholed into musical groupings they felt they were above. Lyrics referencing the genre choice include "gimme deathpunk baby, and I like it" from the song "Get it On." Sharing characteristics with certain musical predecessors, (Sex Pistols wearing swastikas, etc.), Turbonegro has been praised by some as playing the most up-to-date form of punk with an anarchic blend of humour, shock and sexuality. 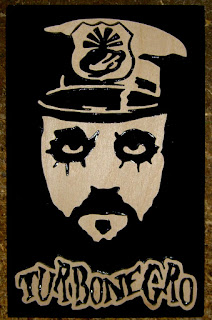 In the Turbonegro – The Movie DVD extras, Happy-Tom says that, early on, festival-goers expected Turbonegro to be gothic metal or black metal in the vein of other Norwegian bands. They are notorious for their on-stage gimmicks. An early version of the band wore blackface and wigs onstage in an effort to challenge those watching their shows. On The Reserection DVD, the band states that early on they were often driven away from shows they were to play because they were not edgy enough or did not fit the look that the crowd wanted. As a result, the onstage schticks started to become as much of the Turbonegro experience as the music. Following several tours in blackface, the band started an oddball theme of tight denim pants, nautically themed stage props and homosexual innuendo, stylistically similar to the characters of Tom of Finland. A tongue-in-cheek joke, the homosexual/transvestite stage presence found its way into the band's music, including songs such as "Prince of the Rodeo" and "Rendezvous with Anus" which are both thinly veiled references to anal intercourse. Levi's jeans endorsements soon followed, and the trucker-cut jacket soon became standard fare amongst fans. 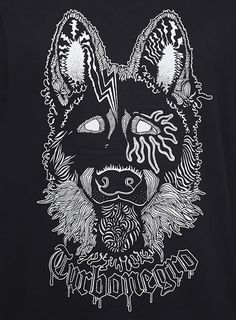 The band's first break-out album, Ass Cobra (1996), was widely acclaimed. Jello Biafra (DKennedys) would later comment that it was one of the best punk albums of the 1990s. Following Ass Cobra, was Turbonegro's most critically acclaimed release Apocalypse Dudes (1998). Apocalypse Dudes introduced a combination of 1970s arena rock, irreverent lyrics, and punk stylings, which brought the band a level of notoriety that they had not achieved at any other point in their career.»

Related Posts
(The Triangle)
NY Dolls
Ramones
(The Glam-dressers)
Motley
TS
G'N'R
Plus all links above (give it a search!)
and don't forget
For All Punk @ Kokdi Press HERE