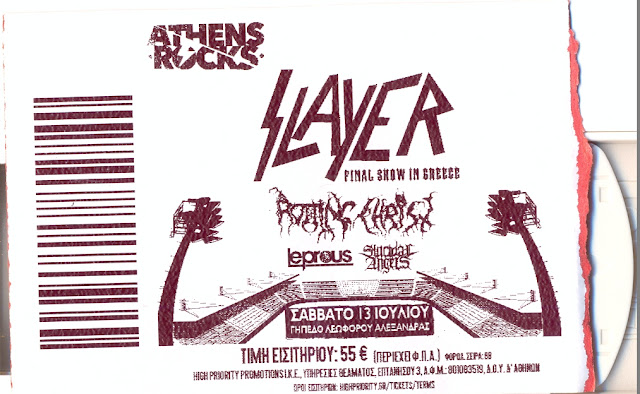 Being in such an event, as Slayer’s final concert in Greece, was something rather difficult to express the way it was supposed to be expressed. Words often loose significance or tend to exaggerate when are said or written down in a blog like this... Having said all of the above I have to acknowledge that this concert was way more historically significant than any other that I’ve witnessed to date (perhaps only Sabbath’s original line – up performance in 2005 was an equal match). Ok the band was 2/4 new. Ok the band has released an album worth listening to but was lacking the raw power of their 5 landmark releases. Ok there were Rotting Christ also. But this rambling is not about my personal best show (not even in the top 5); certainly it was the most awe-inspiring and shocking performance of my life!!! This rambling is not about their decision (which, with strong denial in my heart, I must embrace); but certainly as a move must be credited to the originality and the sincerity of the founding members; a worthy/honest move to their legacy as should be done by genuine, groundbreaking thrashters of our time; that SLAYER members really were! Only Lemmy could survive mediocre releases and constant tours with the dignity he deserved as a commonly/widely accepted & definitive ICON of our music. After all, who am I to judge this decision of the adolescent love of mine? 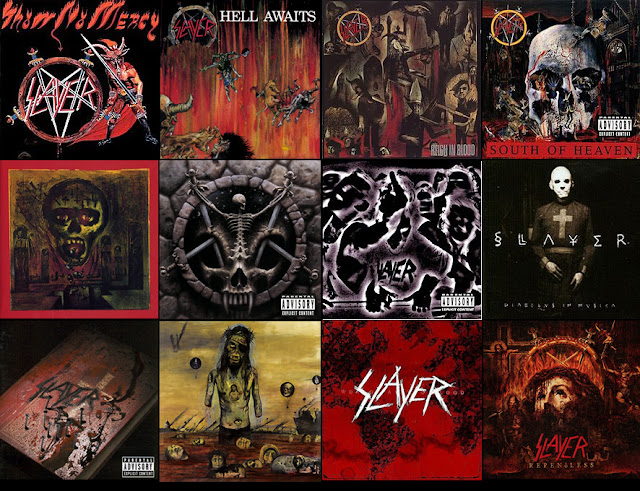 It is about this significance of the sense of FINALITY however... And as far as I'm concerned (due to my immature attitude) before the concert I wasn't ready to believe that, "that was that"..as every little death in our wake I wasn't ready to process this information. The "finality" though, ultimately gave to the event a major importance - and proven afterwards it gave the SLAYER mark all over it; probably their best appearance in Greece). Nevertheless the change of venue was "a must" in order for us to enjoy last Saturday’s performance. If it was again on open field there would be a major energy “leaking” problem. A closed venue, on the other hand, provided the sense of no escape to what is coming. And “it” came, “it” saw and “it” fucking conquered alright!!! The sense of impending doom was all over the arena mixed up with other emotions of nostalgia, or refusal. And this impending doom sensation was not about the infamous mosh pit or the relentlessness of the band’s energy on stage; but for the fact that everybody knew in advance that THIS show is going to be the FINAL show of, probably, the BEST band in the genre. 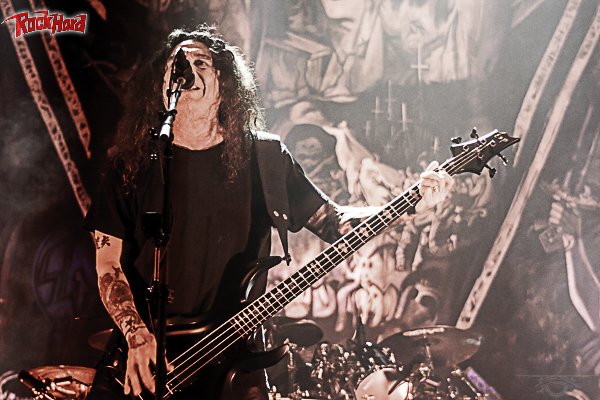 Araya’s farewell looks to the crowd for over 20 minutes or so was quite emotional, or his final quote: “it was too hard for me” that indicated the lack of raw strength Slayer’s frontman ought to have throughout the tours that were both breathtaking and ferocious. He was emotional despite the fact that he didn’t speak; he just stood there saying a silent goodbye to rioting teens and 35 – 40 + audiences that had their own agenda and addressed to him either by chanting his name or demanding an encore. Some of us felt the same feeling; that this night one of the best era of our adulthood (or early adolescence) was completing a full circle and was coming to a meaningful, unwanted yet certain and gratuitous end. The Greek Tom spoke was something like hearing a man’s, forced to leave his family, saddening farewell.. «Θα μου λείψετε….Αντίο». I was crying like a little baby not because I wanted to; not because I was opposed to their choice; but because I felt that something really died that night, but forever will haunt our memories….. 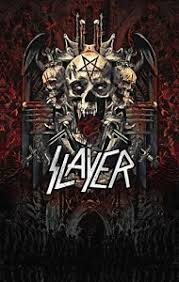 My inner child felt the obligation to nag and growl about this inevitable end. But my better self felt a strange kind of satisfaction. That I was present and accounted for, from the beginning to the always bitter but way satisfying end, even though I was way small when their first 3 epic albums were released…When I “got” them though I always felt that I’ve discovered by far the most aggressive band on the planet, not only when competing other bands of their genre, which they crafted out in the beginning of the 80’s, but throughout the music industry. 3 things that I love Slayer for are: 1) the raw aggressive dominion that their music had to my ears to date, 2) the relentless pounding of the drum kit that were powerful, over technical (for the genre’s needs that is)  and faster than anything else I’ve heard TO DATE (only Hoglan can be compared with Lombardo; to my ears that is) and 3) the lyrics that suited the band’s needs to provoke and gain new supporters originally from exploiting the early 80’s trend stating “you think you can destroy me you’d better think again” in accordance to major labels that already set the standards (e.g. Venom); with south of heaven release the band “earned” a new soldier that coped to the band’s needs (for dark topics) and presented us lyric masterpieces such as South, silent scream, Mandatory, read between the lies, war, blood, expendable, divine, serenity, sex-murder-art, world painted blood, God send death e.t.c. Kerry King however is prevailing this area; he always had a way to provoke not only using metaphysical topics. And to provoke better than the punk-oriented Jeff (that had his share of misunderstandings with cretins). Perhaps the lyrics of Cult may explain in a better way what I'm trying to say (I think that this song alongside Dittohead & Pride In Prejudice are the culmination of King's lyrical contribution to this larger-than-LIFE-band); especially to the point where Tom spits out the blasphemous "I've made my choise: 666". Araya surely added to this notion and combined forces with the guitarists duo in a time that the band felt like it was starting to dissolve; sadly for the haters, it took 35 years for this to happen…

But let us stick to the violence notion. Did Slayer use violence as a commercial tool, or it was just important for them to exploit it as the most suitable vehicle for their trademark sound? I think that Slayer did obviously exploit violent topics especially in the beginning, but after meeting Rick Rubin I think that exploiting violence was their obvious game. Are they glorifying violence or are they using it to point out things that are maybe disturbing to some but existing whatsoever either setting the quality of living, or establishing a certain status quo that both Slayer and their audiences despise (police brutality, racial slur, sexism, Christian ethos on abortions and finally the Church as people's opium)?

Some would easily say that they glorify violence the way that cannibal corpse do. But if you take a closer look to their lyrics you would easily spot a vast difference in the approach. Songs like chemical warfare, ghosts of war and war ensemble DO NOT praise war and, like Sabbath did with War Pigs, they blamed satanic forces (military leadership) that moved soldiers like puppets in a battlefield. Opposite bands like bolt thrower for example (awesome band), they do not glorify warfare; instead they ostracize these practices. And that’s the great difference in the band’s growing up procedure; “Show no mercy” & “hell awaits” (even though they are remarkable releases for their time and significance for the genre) did not carry the same mentality with what followed “reign in blood” release onwards. 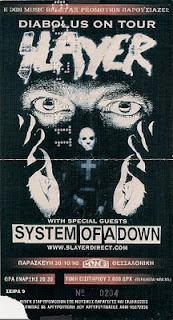 Maybe this is a matter of perception; maybe one considers that after listening to Slayer one should go out on a killing spree. This is not my opinion; whoever thinks himself as a Slayer fan has this music for lashing out the daily aggression we all suffer from, into headbanging, moshing, or even growling, discarding thus the negativity and natural resentment to human race and its mistakes, that surely in the overdeveloped capitalistic societies of the western world, are many and crucial for the well-being of the rest of the world. The overgrowth of aggression in these societies is commonly expected and a LA band surely knows about it; that’s why Slayer spent 35 years and more addressing it, through their lyrics!!! To make my point clearer I have to compare Slayer’s lyrics to George A. Romero’s life work (with his 6 – alogy of zombie movies). What Romero did is that he used a horror icon (firstly he created it) – a vehicle, to criticize western world’s capitalistic ethics and behaviors (e.g. the militia / night, shopping frenzy / dawn of the dead, quest for control / day of the dead, need to accumulate – quest for power / land of the dead, capitalists inability to learn / diary of the dead, family domination / survival of the dead). Exactly what Slayer did with songs like sex-murder-art, temptation, catalyst, flesh storm, world painted blood, hate worldwide, mandatory suicide, consfearacy, skeletons of society, Jesus Saves, americon, new faith, cult, beauty through order, jihad, pride in prejudice and many more!! 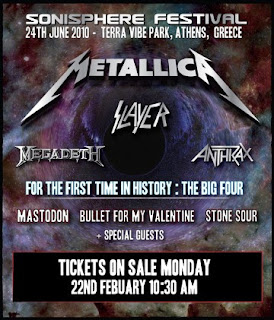 Back to the show, I have to say that the playlist was inadequate (to my likings; don't get me wrong I wanted to last a couple of hours more), the light/pyro show was slayeresque enough, but the overall sensation of the night was that Slayer finally delivered a show in Greece that matches their reputation, name & brand, making that show their best one in these 6 times that they made it to our country (12/07/96 – «Rock of Gods Festival», 31/10/98 – Γήπεδο Περιστερίου, 08/07/05 – «Rockwave Festival», first time with their original line up, 24/06/10–«Sonisphere Festival», 01/07/13 – «Heavy By The Sea Festival», 13/07/2019 Athens Rocks); some can argue about their second live in Peristeri (again in a closed venue) but after my mini – poll while exiting the venue the last one was THEIR BEST ONE and I think very few will disagree….So after 23 years and a day the circle of Slayer’s live shows finally came to a bitter but glorious end, with an event worthy of their reputation combining both the brute force of their inaugural days and the infamous trades that were shaped over the notorious trendsetting days that followed.

After seeing that live and hearing Tom’s voice saying that we will be missed, I felt like it was the day A WHOLE MUSIC GENRE died; and even though this is quite unjust for bands like Anthrax, Kreator, Testament, Overkill, Exodus, Triptykon and so on (I do not include Mets because they, sadly to me, transcended the genre), that still perform a somewhat thrash metal, no one could argue that the Kings of Thrash has vacated their dominion and no one else seems fit to take on the mantle (sorry Mille!).

See above for more links 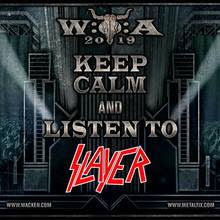