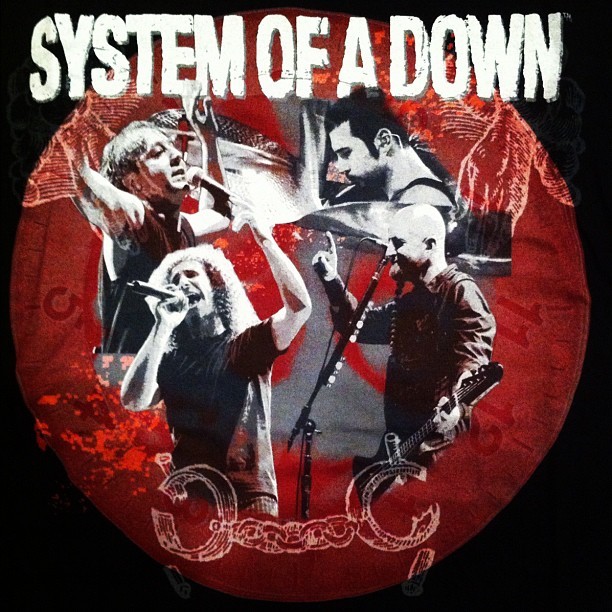 Today’s suggestion came really easy, considering yesterday's band name...The real question with this suggestion may be their low position in MyTop100 List of Rock music, since their 2nd album is already considered an instant classic due to the originality they brought in metal scene which seemed in the late 90’s dying or about to. The groundbreaking sound, the style of melodic hardcore (??) with punk (highly political I mean) lyrics and of course groovy rhythms and the absence of lead guitars; this I say according to the «must», a classic metal band of the 80’s, would have on incorporating a solo in a song; even Kerry King tried to squeeze a «something» of a guitar solo!! In the 90’s though and after Morello and his crew abolished this classic concept of a solo, there were a strong belief that playing a solo is outdated and pointless; even a solo of Kerry King’s!! Stoner was already considered (and was) a reincarnation of the mighty 70’s, thus not original, so today’s band, even though they released their debut album in late 90’s had definitely the most innovative sound in the metal business. If Pantera IS the most significant metal band in the 90’s (no not Nirvana!!), today’s suggestion is surely amongst the most significant of the 00’s, even though they're finally labeled as just Rock (not even Hard Rock in wiki!!) 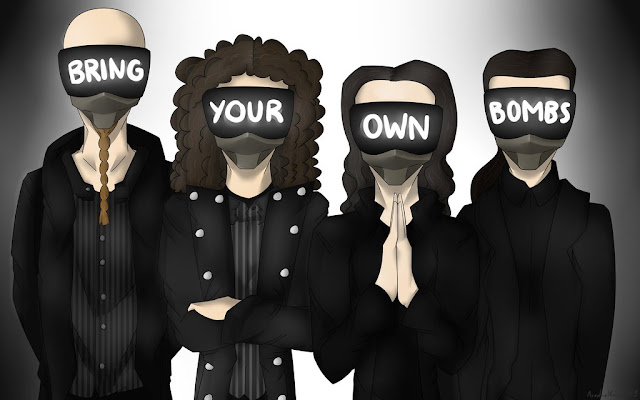 Before getting stated with info, the main thing I remember about this band is that original metalheads rescented the idea of SOAD labeled as pioneering metal. @ Greece in particular, when we had the good fortune seeing them supporting Slayer (on Diabolus On Tour @ 31/10/1998) the Greek crowd practically hooted them off the stage!! It's like Jesus said: Forgive them, they do not know what they're doing, despite the fact I totally "get" this kind of reaction, from a well known hardcore crowd, proud and rather monolithic in perceveing alternative sounds incorporated in "their" music and don't forget; this crowd, eagerly awaited Slayer for their 2nd coming to Greece, so....no wonder about their absence form encyclopaedia metallum
Specifically and as we read on our beloved RYM: «System of a Down was formed in the mid-90s by four Hollywood kids of Armenian descent. Their self-titled release in 1998 was well-received by metal and punk fans, but didn't get mainstream popularity. The follow-up album, Toxicity, released in 2001, was hailed as one of the most innovative metal records of that time and launched SOAD into the spotlight with their hit single "Chop Suey!". The album mixed aggressive hardcore attacks with traditional metal riffs, along with a good mix of melodic songs (such as "Aerials", which became a major hit on rock radio). The band also became famous for their social and political commentary, seen well on songs like "Prison Song" or "Deer Dance". Ironically, Toxicity was the Billboard #1 album on 9/11, which got SOAD into trouble with the more conservative media. The fans, however, didn't care, and the album sold millions.
One year later the band released a collection of unreleased songs from the recording sessions of the first two albums. This album, titled StealThis Album!, also sold quite well, despite receiving nowhere near the popularity of Toxicity.
In 2005, they released a double album titled Mezmerize/Hypnotize. The first side was released in May, and was very well received by fans and critics, spurred by the popularity of its first single, "B.Y.O.B.", which became SOAD's biggest hit to date with its aggressive guitar chords and blunt anti-war commentary, reaching #27 on the Billboard Hot 100. The second part was released in November and was spurred by the popularity of the self-titled track "Hypnotize", an example of SOAD's more mellow side. This double-album featured more of the blunt political commentary featured in previous albums ("B.Y.O.B.", "Tentative", and "Soldier Side" all feature extensive anti-war commentary), as well as a large role for backup singer Daron Malakian, who often sings with Serj in a lead singer role ("Hypnotize") or even sings entire songs by himself ("Lost in Hollywood").

In 2006, they starred in the documentary Screamers, on the Armenian genocide. In May 2006, System of a Down went on hiatus. The band says that they will not split up, but that the hiatus will probably last for a few years as each member pursues their own solo or side projects.

Interviews in late 2010 revealed that System of a Down will play their first show since the hiatus in June 2011 in Paris. It is expected to be followed by a full European tour and possibly a reformation of the band.» That’s why we finish today’s All Releases playlist, with their Armenian show, a political statement since it was part of the awareness movement for global justice in the matter of Armenian Genocide.
So ladies and gents may I present to you SOAD (ranking #98 @ MyTop100List), a.k.a.
All Releases