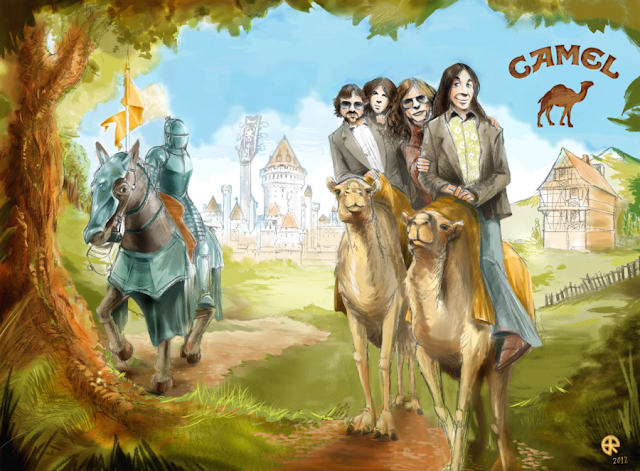 Another day another pain, another sorrow, another gain….Today’s suggestion is surely a Gain aesthetically. One of the pioneers of prog Rock of the 70’s with a distinctive sound that made anyone else sound different. It seems that this band is a genre of its own, a kind of undisputed Wishbone Ash of Prog without the underrated notion that sadly Ash carries as legacy. You may consider them easy listening, u may say that it’s too cerebral; but they are not as «difficult» as Genesis were and they are far «easier» to listen and comprehend the journey suggested, than e.g. Yes. Really intriguing fun to listen to and quit relaxing to just chill lay back and relax… after all it’s just the middle of the week!! 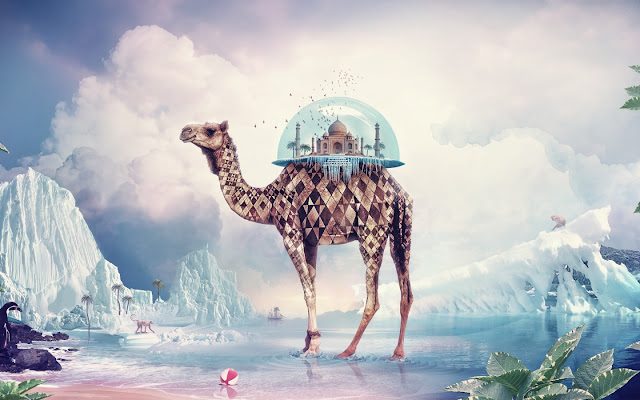 For more info we rely on the experts (RYM): «Camel were born out of the early The Brew, a three-piece blues outfit from Guildford, Surrey, consisting of guitarist/vocalist Andrew Latimer, bassist Doug Ferguson and drummer Andy Ward. After a first but unsuccessful release in 1971 the band decided to regroup and placed an ad in the British Melody Maker. Shortly thereafter Pete Bardens, formerly of The Shotgun Express and Them, joined them and Camel was born. In fall 1971 the group played their first gigs in Ireland.  In 1972 the group landed a recording contract with MCA Records, which resulted in the release of the self-titled debut Camel in 1973, chiefly composed by Latimer and Bardens. Despite humble success with that debut, MCA waived the option for a second album, and the band signed to Decca Records (where Camel would stay for the next ten years). Album #2, Mirage, hit the market in 1974 and achieved even more sales. Their third release (and first concept album), The Snow Goose (1975) can be considered their international breakthrough, putting the band at the top ranks on the list of progressive rock acts. In October 1975 the group performed The Snow Goose at Royal Albert Hall to a sold-out crowd. Interestingly, the next release Moonmadness achieved less success in the UK than in America. The quartet was now completed by unofficial member and saxophonist Collins, but unfortunately, during the recordings to the RainDances album, conflicts about the musical direction of the band between Latimer and Bardens arose. Meanwhile drummer Ward pushed for more complicated rhythm arrangements which would conflict with bassist Ferguson's views who, as a result, left Camel. He was replaced by Richard Sinclair whose previous band Caravan took a rest. Sinclair possessed the jazzier style Ward had hoped for, but the mix of personalities didn't gel as it used to be. Also, the musical conflicts between Latimer and Bardens culminated in more tensions throughout the making of Breathless (1978). After those recording sessions were finished Pete Bardens walked away from Camel in mutual agreement in order to pursue a solo career. The line up was now completed by two new keyboardists, Richard Sinclair's cousin Dave Sinclair and Jan Schelhaas (both also of Caravan). Latimer, tongue-in-cheek, one time even jokingly stated that he was thinking of renaming the band into 'Caramel'. The formation was now able to experiment in a way which would've been impossible before. The subsequent Breathless tour lasted three months after which David exited Camel (substituted by Kit Watkins who came from Happy the Man) while Richard Sinclair was asked to leave the band. He was replaced by Colin Bass. Two albums were released in the passage between the old and the new Camel which are considered to be their weakest by many: I CanSee Your House From Here (1979) and Nude (1980). The tour for Nude would become the most devastating for the group ever, since Ward succumbed to massive drugs and alcohol abuse and attempted committing suicide. To the relief of all, without success, but it left him unable to play drums, the remainder of the tour was cancelled and the group came to a halt for a while.
Decca Records, having bound Camel with a tight contract, didn't particularly care for the internal problems of the band at the beginning of the new decade. Latimer had to accept that Ward didn't appear to recover anytime soon, and with time running out the next album had to be prepared. It was now clear that Latimer ran the Camel show all on his own. Fate would have it that during the recording sessions of their seccond concept album Nude, and with The AlanParsons Project recording next door at Abbey Road Studios, singer Chris Rainbow and bassist/singer David Paton (formerly of Pilot) popped in on the Camel sessions and new friendships were forged. The Single Factor was completed using an all-new line up: Rainbow and Paton, as well as Anthony Phillips (former Genesis), FrancisMonkman (keyboards), and guest drummers Simon Phillips (The Who, Jeff Beck, Toto), Dave Mattacks (Fairport Convention) and Graham Jarvis (Cliff Richard). The album became much more accessible than previous Camel productions and contains fewer instrumental tracks than the previous releases. There was also an appearance of Pete Bardens, as time had healed the rift between him and Latimer, in spite of their opposing musical views. Pete's participation in these recordings session forged friendship with Paton and would one year later lead to Bardens becoming a member of Keats. The subsequent tour was a breath of fresh air for Latimer, with a magical mix of personalities of the three Scotsmen Rainbow, Paton and drummer Stuart Tosh (of 10cc), even though it was only a temporary respite. In October 1982 manager Max Hole unexpectedly announced his departure, pursuing a career with a major record label. 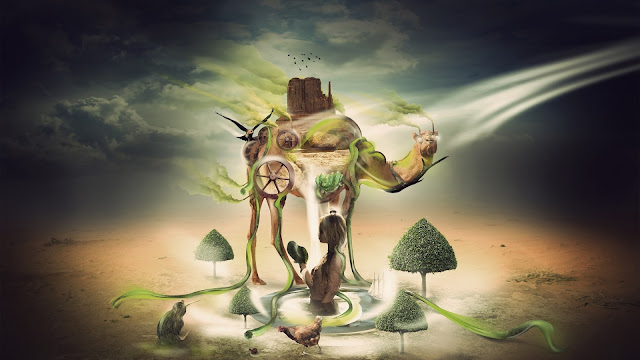 In early 1983 it became clear that Ward couldn't continue his official Camel membership and left the group formally. Latimer now had to concentrate on solving long-lasting legal problems, as their former manager had sued them but settlements in Camel's favor could be reached by Latimer personally. But there were also bright spots for the project, and a new contract with Decca (who had just been taken over by Polygram) was signed. Andy also got in touch with Dutch keyboardist Ton Scherpenzeel of Kayak whose playing he had always admired. The two musicians soon agreed on recording the next Camel album together, and the recordings of Stationary Traveller commenced. Former Camel bass player Colin Bass, who had moved to the US in 1981, returned to the UK and joined the two, alongside with Chris Rainbow and drummer Paul Burgess (Jethro Tull, 10cc). Unfortunately, Ton was afraid of flying which limited the possibilities of the band to appear live, but the band had also recruited Richie Close for the job on background keyboards.

The aforementioned legal trouble with their former manager Geoff Jukes came to a peak in 1986 and Jukes would finally accept the futility of his suit. The legal battle was finally put aside after Latimer had gathered support of Bardens, Ward and Ferguson. Due to PolyGram Records having taken over Decca the atmosphere between the company and Latimer became increasingly tainted and Andy realized that he needed to get out of the contract. After a 10 year collaboration Camel and Decca amicably split up and Latimer was now free to search for a more like-minded company. Disillusioned by the various negotiations in the course of 1987 Latimer decided to move to the US in '88, took a one year sabbatical and used the time to rewrite parts of a forthcoming album, Dust and Dreams. Even after his return to England he realized the difficulties and even futility of finding a new company and eventually decided to found Camel Productions in 1991. The new album, which hit the market in March '92, was an adaptation of a Steinbeck novel, The Grapes of Wrath, and literally shocked Latimer with its unexpected success after being away from the market with a new studio product since 1984. He had also devoted to re-master old reel-to-reel tapes, which resulted in the release of On the Road 1972, directly combating bootlegs which were floating around at horrible prices and with awful sound. It was the start of a successful On the Road-series. CP also re-issued the first Camel album of '73 and soon organized a worldwide tour to promote Dust and Dreams. Other than Latimer, bassist Colin Bass was now the mainstay of Camel, and the two were joined by Mickey Simmonds (keyboards, of Fish, Mike Oldfield) and again, Paul Burgess on drums. 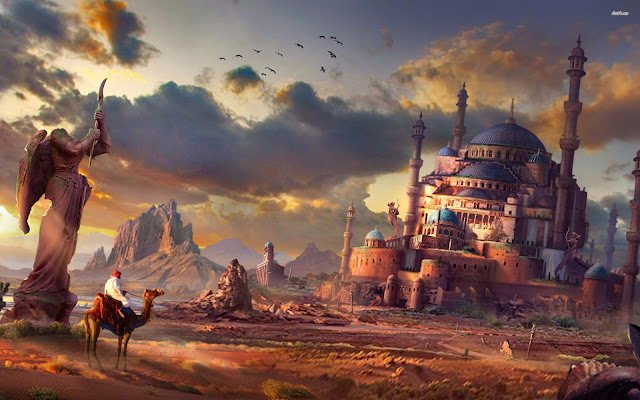 1993, after the successful Dust and Dreams tour, Latimer was hit with the loss of his father. He spent the year in grief and personal time with his family, only returning to the studio in the subsequent year, preparing Harbour of Tears. Andy poured his heart into this recording which culminated in the track "The Hour Candle (A Song for My Father)" which was inspired by a hymn sung at the funeral of his deceased dad. Burgess and Simmonds were struggling to balance their lives with their young kids and life on the road and were therefore replaced by Dave Stewart (drums) and Foss Patterson (keyboards). In 1998 Coming of Age was added alongside the highly successful On the Road-series, both on video and compact disc. One year later Rajaz was brought out, chiefly composed by Latimer on the guitar, followed by A Nod and a Wink in July 2002 which marked a return to the roots of Camel's music.»
So ladies and gentlemen may we present the humble…
Astonishing Releases 1973 – Forever
Camel 1973,
Mirage 1974,
The Snow Goose 1975,
Moon Madness 1976,
Stationary Traveller 1984,
Rajaz 1999,
The Snow Goose (30 years later re-recording) 2013
Plus a ’75 Live @ BBC


All Prog Posts of Kokdi HERE