The same trouble I’m having with Sunday’s post I have with this one. To me today’s band was as black, as Paradise Lost were Death Metal in their first two albums. A kind of deathsters Opeth but performing black metal. Tiamat might come in mind..Black Metal surely innovated and reinvented itself with bands such as Rotting Christ or Septicflesh; now u can name another band that sadly is nomore… 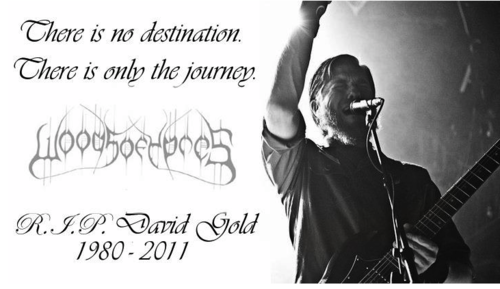 I leave the rest to the experts: «Founded in 2002 by David Gold and Aaron Palmer. David named the band after a fellow Windsor, Ontario-based band called Fact of Death who had a song called "Woods of Ypres". Aaron moved after the recording of the first album and later the two paired up again for a project called The Northern Ontario Black Metal Preservation Society. David passed away in 2011 in a vehicle accident in Northern Ontario on December 21, 2011.

David Gold also performed drums for Joel Violette's project Thrawsunblat on their 2010 demo. Since the break-up of Woods of Ypres Joel has continued on with Thrawsunblat with Rae Amitay (drums) and Brendan Hayter (bass), who had joined Woods of Ypres to play the European tour in support of Woods 5.

David Gold was the owner of Krankenhaus Records (the former label he released Woods of Ypres albums on) and Practical Art Records (the label The Green Album was released on).

The Woods of Ypres logo was designed by Neil Laperriere»

So ladies and gents a band to Blame Canada once again