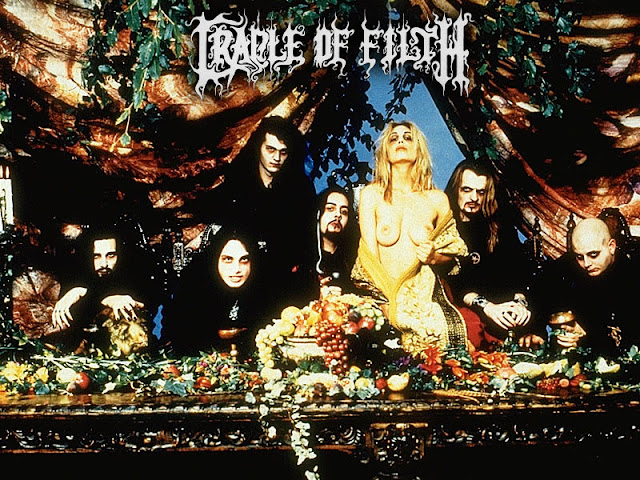 Without any referral to the demise of one of my favorite Greek comedians, which I pledge to do soon enough, I’m cutting right through the chase and start wondering how the f…k I failed mentioning today’s band until now in Kokdi’s
It is not enough that I don’t like as much the new age black metallers as the old ones, but it is safe to say that their disappointing live shows in Greece (excessive use of electric, or pre recorded drum lines) might have done it. Never the less today I’m proposing what once Metal Hammer called: Sex & Death uber alles…. 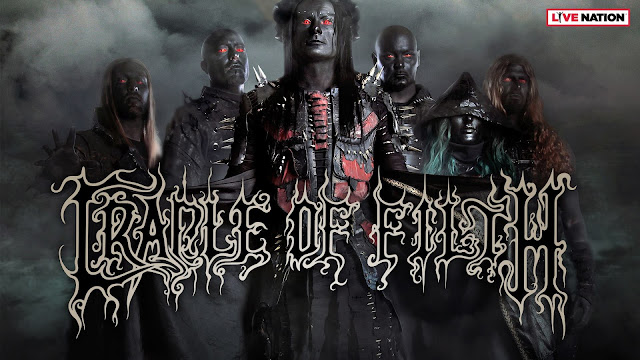 Let’s hear it from the experts: «Cradle of Filth are an English extreme metal band, formed in Suffolk, England in 1991. The band's musical style evolved originally from black metal to a cleaner and more "produced" amalgam of gothic metal, symphonic metal and other metal genres. Their lyrical themes and imagery are heavily influenced by Gothic literature, poetry, mythology and horror films. The band has gone through many lineup changes, with vocalist Dani Filth being the only constant member. They have sometimes being perceived as Satanic by casual observers,[1] even though their outright lyrical references to Satanism are few and far between; their use of Satanic imagery has arguably always been more for shock value than any seriously-held beliefs.[2] 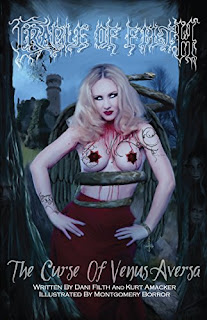 Cradle of Filth's particular genre has provoked a great deal of discussion,[65] and their status as a black metal band or otherwise has been in debate since near the time that the group rose to fame.[66] The band have cited first wave black metal acts such as Bathory, Celtic Frost  and Mercyful Fate among their influences, but Dani Filth, in a 1998 interview for BBC Radio 5 for example, said "I use the term 'heavy metal', rather than 'black metal', because I think that's a bit of a fad now. Call it what you like: death metal, black metal, any kind of metal...".[67] Gavin Baddeley's 2006 Terrorizer interview states that "few folk, the band included, call Cradle black metal these days."[68] In a 2006 interview with Terrorizer, former guitarist Paul Allender said, "We were never a black metal band. The only thing that catered to that was the make-up. Even when The Principle of Evil Made Flesh came out—you look at Emperor and Burzum and all that stuff—we didn't sound anything like that. The way that I see it is that we were, and still are now, an extreme metal band."[69]»
So here you have it folks the imagery and dark poems of 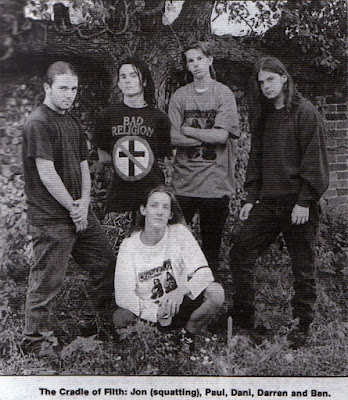 CRADLE OF FILTH
In their top 4 releases