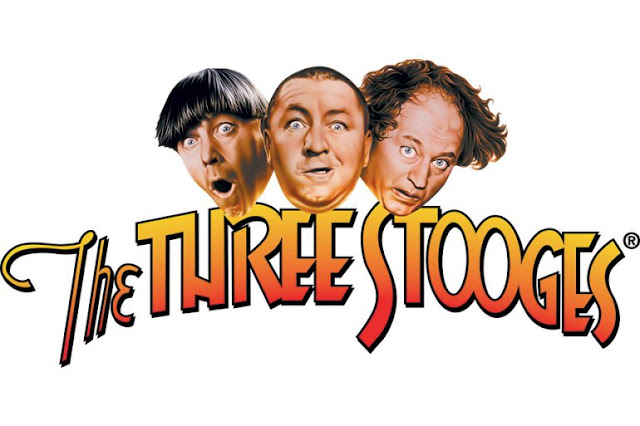 Right before the girl’s time, here comes laughter… «Does anybody remember laughter?» as Plant used to say before Stairway. Curly, Moe and Larry, always stand proud and quite different to these ominous quotes, providing archetypical mixture of vaudeville and slapstick humor with audio preparing thus the stage for EVERY comedian who would use the useful idiot routine (from Jerry Lewis to Jim Carrey) 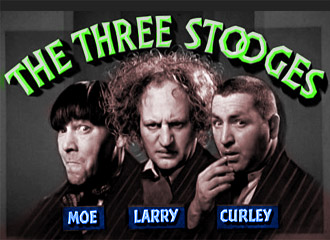 The experts however has much to say about the infamous trio that – to my opinion – exceeded the well known routine of Hardy & Laurel, making themselves the 1st high class comedy group; a force of unrestrained hilarious laughter power that everyone reckons them with. And sadly be the first among other groups that tried to do the exact same thing; only the Pythons did succeed in doing so.
So let’s hear it from them: «The Three Stooges were an American vaudeville and comedy team active from 1922 until 1970, best known for their 190 short subject films by Columbia Pictures that have been regularly airing on television since 1958. Their hallmark was physical farce and slapstick. In films, the stooges were commonly known by their actual first names. Six stooges appeared over the act's run (with only three active at any given time): Moe Howard and Larry Fine were mainstays throughout the ensemble's nearly fifty-year run and the pivotal "third Stooge" was played by (in order of appearance) Shemp Howard, Curly Howard, Shemp Howard again, Joe Besser, and CurlyJoe DeRita. 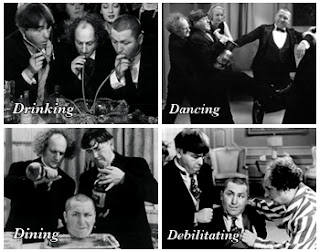 The act began in the early 1920s as part of a vaudeville comedy act billed as "Ted Healy and His Stooges", consisting originally of Healy and Moe Howard. Over time, they were joined by Moe's brother Shemp Howard, and then Larry Fine. The four appeared in one feature film, Soup to Nuts, before Shemp left to pursue a solo career. He was replaced by his younger brother, Jerome "Curly" Howard, in 1932. Two years later, after appearing in several movies, the trio left Healy and signed on to appear in their own short-subject comedies for Columbia Pictures, now billed as "The Three Stooges". From 1934 to 1946, Moe, Larry and Curly produced over 90 short films for Columbia. It was during this period that the three were at their peak popularity.
Curly suffered a debilitating stroke in May 1946, and Shemp returned, reinstating the original lineup, until his death of a heart attack on November 22, 1955. Film actor Joe Palma was used as a stand-in to complete four Shemp-era shorts under contract (the maneuver thereafter became known as the "fake Shemp"). Columbia contract player Joe Besser joined as the third Stooge for two years (1956–57), departing in 1958 to nurse his ailing wife after Columbia terminated its shorts division. The studio then released all the shorts via Screen Gems Columbia’s television studio and distribution unit. Screen Gems then syndicated the shorts to television, whereupon the Stooges became one of the most popular comedy acts of the early 1960s. 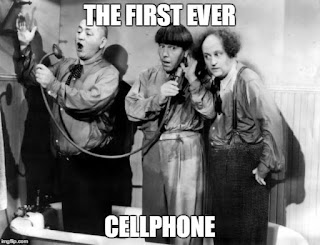 Comic actor Joe DeRita became "Curly Joe" in 1958, replacing Besser for a new series of full-length theatrical films. With intense television exposure, the act regained momentum throughout the 1960s as popular kids' fare, until Fine's paralyzing stroke in January 1970. Fine died in 1975 after a further series of strokes. Attempts were made to revive the Stooges with longtime supporting actor Emil Sitka in Fine's role in 1970, and again in 1975, but this attempt was cut short by Howard's death on May 4, 1975.
Over half a century since their last short film was released, the Three Stooges remain popular with audiences. Their films have never left American television since first appearing in 1958, and they continue to delight old fans while attracting new viewers. They were a hard-working group of comedians who were never the critics' darlings, a durable act who endured several personnel changes in their careers that would have permanently sidelined a less persistent act.[8] The Stooges would not have lasted as long as they did as a unit without Moe Howard's guiding hand.[4]
The Ted Okuda and Edward Watz book The Columbia Comedy Shorts puts the Stooges' legacy in critical perspective:

Many scholarly studies of motion picture comedy have overlooked the Three Stooges entirely – and not without valid reasoning. Aesthetically, the Stooges violated every rule that constitutes "good" comedic style. Their characters lacked the emotional depth of Charlie Chaplin and Harry Langdon; they were never as witty or subtle as Buster Keaton. They were not disciplined enough to sustain lengthy comic sequences; far too often, they were willing to suspend what little narrative structure their pictures possessed in order to insert a number of gratuitous jokes. Nearly every premise they have employed (spoofs of westerns, horror films, costume melodramas) has been done to better effect by other comedians. And yet, in spite of the overwhelming artistic odds against them, they were responsible for some of the finest comedies ever made. Their humor was the most undistilled form of low comedy; they were not great innovators, but as quick laugh practitioners, they place second to none. If public taste is any criterion, the Stooges have been the reigning kings of comedy for over fifty years.[8]»
So with a World Cup being transformed into another Euro campaign it is definitely time for some laughter. Here you have it folks the unsurpassed