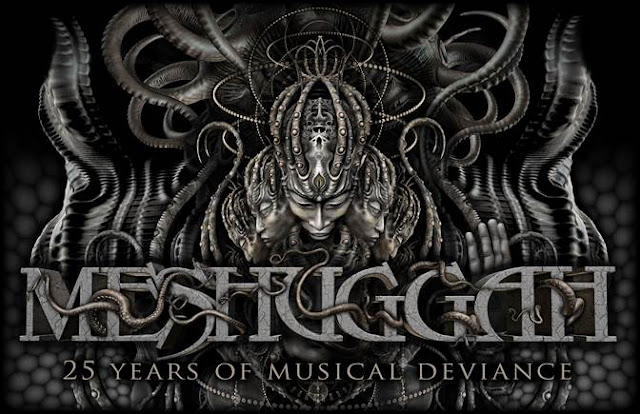 Let us continue May’s story (???) with some soft and gentle before someone tell us that we’ve softened up. Today’s band comes from the notorious north full of technicality and brutal awesomeness spawned by the over the top sometimes thrash-like aggression and prog oriented polyrhythms.

But let’s hear it from the experts: «Meshuggah (/məˈʃʊɡə/)[1] is a Swedish progressive metal band from Umeå, formed in 1987. Meshuggah's line-up consists of founding members vocalist Jens Kidman and lead guitarist Fredrik Thordendal, drummer Tomas Haake, who joined in 1990, rhythm guitarist Mårten Hagström, who joined in 1993 and bassist Dick Lövgren since 2004.
Meshuggah first attracted international attention with the 1995 release Destroy Erase Improve for its fusion of fast-tempo death metal, thrash metal, progressive metal and jazz fusion elements. Since its 2002 album Nothing, Meshuggah has switched from seven-string to downtuned eight-string guitars. Meshuggah has become known for their innovative musical style, complex, polymetered song structures and polyrhythms. Meshuggah was labelled as one of the ten most important hard rock and heavy metal bands by Rolling Stone and as the most important band in metal by Alternative Press. Meshuggah has found little mainstream success, but is a significant act in extreme underground music, an influence for modern metal bands and has a cult following. In the late 2000s, the band was an inspiration for the djent subgenre within progressive metal and in 2018, Meshuggah was nominated for a Grammy Award for their song "Clockworks" under the "Best Metal Performance" category.[2]»
So let us hear the polymetered