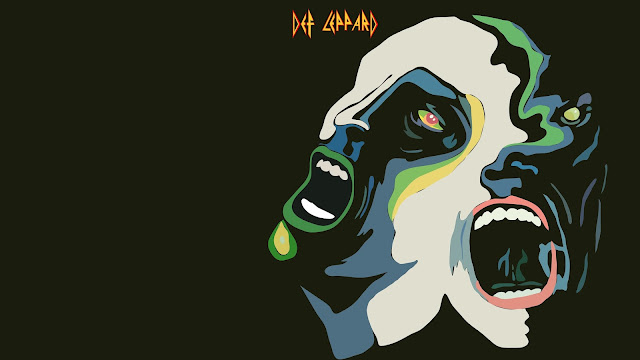 Last day’s suggestion really came up with today’s suggestion. Remembering Mutt Lange as one would say but this is not the case. Not until a dispute over the worth of rock subgenres like AOR made me furious about the fact that, without a doubt, some bands started out quite differently but ended up being the absolute trendsetters (or one of the biggest trendsetters) of their time. Today’s band fit that description.
They are well known for the 80’s megahits, or their one – arm drummer, but few considered their not-so-humble part in the great NWOBHM. Many disputed over the frenzy of guitar solos among groups like Raven or Tresspass but few doubted the capabilities of the Deaf Leopards that stormed English pubs during the last days of the 70’s an the first glorious years of the 80’s (who can forget the deminishing of a great song from 78's Getcha Rocks Off, to 80's weak Rocks Off). 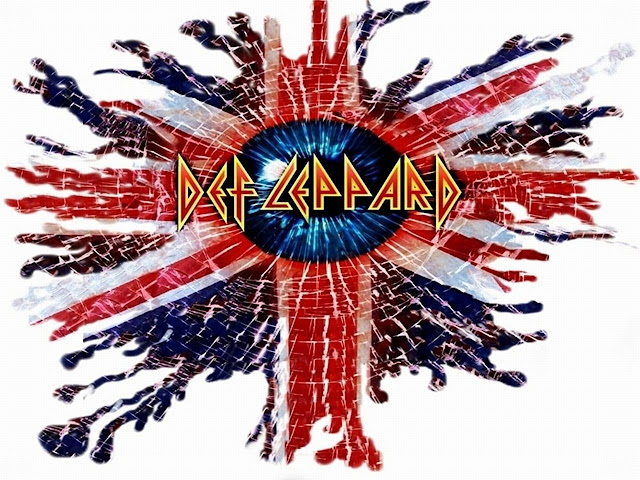 Starting out from 77 they weren’t among the ones that promptly recorded as happened with Maiden or Saxon, but when they found their way, it was only a matter of albums before reaching supreme commercial success, making the Leppards one of the world’s best-sellin artists. With a little help of a guy called Robert John “Mutt” Lange (we will revisit the name promptly)
So as the specialists (WIKI) mention:
«Rick Savage, Tony Kenning, and Pete Willis, all students at Tapton School in Sheffield, South Yorkshire, formed a band called Atomic Mass in 1977. The band originally consisted of Willis on guitar, Savage on bass (after originally playing guitar), and Kenning on drums. Only 18 at the time, Joe Elliott tried out for the band as a guitarist following a chance meeting with Willis after missing a bus, in November 1977. During his audition it was decided that he was better suited to be the lead singer. Their first ever gig was in the dining hall in A Block in Westfield School in Mosborough, Sheffield.[14] 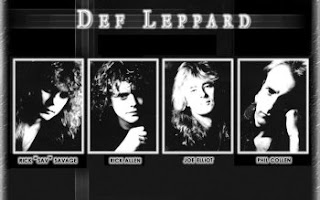 The band adopted a name proposed by Elliott, "Deaf Leopard", which was originally a band name he thought up while writing reviews for imaginary rock bands in his English class (and in at least partial reference to Led Zeppelin).[15] At Kenning's suggestion, the spelling was slightly modified in order to make the name seem less like that of a punk band. In January 1978, Steve Clark joined the band. According to Elliott, he successfully auditioned for the band by playing Lynyrd Skynyrd's "Free Bird" in its entirety.[16]
In November, just prior to recording sessions for what would be a three-song release known as The Def Leppard E.P., Kenning abruptly left the band; he would later form the band Cairo. He was replaced for those sessions by Frank Noon. By the end of the month, Rick Allen, then only 15 years old, had joined the band as its full-time drummer. Sales of the EP soared after the track "Getcha Rocks Off" was given extensive airtime by renowned BBC Radio 1 DJ John Peel, considered at the time to be a champion of punk rock and new wave music.[17]
Throughout 1979, the band developed a loyal following among British hard rock and heavy metal fans and were considered among the leaders of the new wave of British heavy metal movement. Their growing popularity led to a record deal with the major label Phonogram/Vertigo (Mercury Records in the US). Def Leppard's original management, MSB, a local duo consisting of Pete Martin and Frank Stuart-Brown, were fired after Martin and Joe Elliott got into a fistfight over an incident on the road. The band approached Peter Mensch of Leber-Krebs management, who had booked them on a tour of the UK supporting AC/DC. Mensch, who admitted that he had had his eye on the band, became their manager.[18] 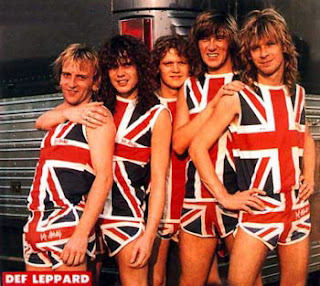 The band had by then caught the attention of AC/DC producer Robert John "Mutt" Lange, who agreed to work on their second album, High 'n' Dry, released on 11 July 1981. Lange's meticulous approach in the studio helped them begin to define their sound. Despite the album's unimpressive sales figures, the band's video for "Bringin' On the Heartbreak" became one of the first metal videos played on MTV in 1982, bringing the band increased visibility in the U.S.[22] The band continued to use the up-and-coming music television industry to reach fans over the years with their unique videos and the extravagance of their concerts.[23] After the album's release, European and American tours followed. The band opened for Ozzy Osbourne and Blackfoot.[24]
Phil Collen, former guitarist with the glam band Girl, on 12 July 1982 replaced Pete Willis, who had been fired the previous day because of excessive alcohol consumption on the job. (Willis would later resurface with the bands Gogmagog and Roadhouse.) This personnel change took place during the recording of their third album, Pyromania, which was released on 20 January 1983 and also produced by Lange. The cover artwork depicted an animated picture of a huge flame emerging from the top floor of a skyscraper, with a bullseye aimed at the flame. Though many stores would not carry the album due to the cover art, the band did not change the artwork. The lead single, "Photograph", turned Def Leppard into a household name, supplanting Michael Jackson's "Beat It" as the most requested video clip on MTV and becoming a staple of rock radio (dominating the US Album Rock Charts for six weeks), and sparked a headline tour across the U.S.[25]
Fueled by "Photograph" and subsequent singles "Rock of Ages" and "Foolin'", Pyromania went on to sell six million copies in 1983 (more than 100,000 copies every week in that year) and only was held from the top of the US album charts by Michael Jackson's Thriller. With the album's massive success, Pyromania was the catalyst for the 1980s pop-metal movement.[26] In 2004, Pyromania was certified Diamond having sold over 10 million copies in the US.[27] Def Leppard's US tour in support of Pyromania began opening for Billy Squier in March and ended with a headlining performance before an audience of 55,000 at Jack Murphy Stadium in San Diego, California in September. As a testament to the band's popularity at the time, a US Gallup poll in 1984 saw Def Leppard voted as favourite rock band over peers such as The Rolling Stones, AC/DC, and Journey. However, in their native England, Duran Duran secured the number one spot. 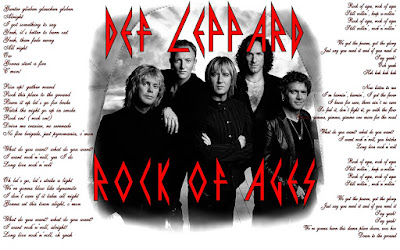 Def Leppard's music is a mixture of hard rock, AOR, pop and heavy metal elements, with its multi-layered, harmonic vocals and its melodic guitar riffs. However, even though they were often considered one of the top bands of the new wave of British heavy metal movement of the late 1970s, in the mid-1980s the band were associated with the growing glam metal scene, mainly due to their mainstream success and glossy production. Pyromania has been cited as the catalyst for the 1980s pop-metal movement.[26] Def Leppard, however, expressed their dislike of the "glam metal" label, as they thought it did not accurately describe their look or musical style.[87] By the release of the Hysteria album, the band had developed a distinctive sound featuring electronic drums and effects-laden guitar sounds overlaid with a multi-layered wall of husky, harmonised vocals. Def Leppard has been cited as an influence by a wide range of musical acts, from heavy metal and thrash metal bands such as Slayer,[88] Pantera,[89] and Metallica[90] as part of the new wave of British heavy metal movement as well as by popular contemporary artists Matt Nathanson[91] and Taylor Swift.[92]
With Pyromania and Hysteria both certified Diamond by the RIAA, Def Leppard is one of only five rock bands with two original studio albums selling over 10 million copies each in the US,[11] alongside the Beatles, Led Zeppelin, Pink Floyd and Van Halen.[11] Both Pyromania and Hysteria feature in Rolling Stone magazine's list of the 500 Greatest Albums of All Time.[6][28]
Def Leppard was among the most successful of the new wave of British heavy metal bands in the early 1980s. They combined the raw power of metal with a pop emphasis on melody, catchy hooks and vocal harmonies that, particularly later on, contrasted sharply with harsher contemporary metal and punk bands.[93] Their early albums such as On Through the Night (1980) appealed to metal fans and influenced the likes of Dimebag Darrell of Pantera[89] and Jeff Hanneman of Slayer.[88] Their hugely popular later albums, such as Hysteria (1987), appeared irregular due to their perfectionism in the studio, but appealed to a broad range of music fans.[93]
Despite their huge commercial success, Elliott has said in an interview that he feels the band does not receive its fair share of respect from the British music press and he claimed the band had been barred from the BBC's Later with Jools Holland series because they were "not cool enough".[94]»
After all these who can blame them for having complaints? Rock ‘n Roll are quite known for their persistence and undying love to the groups that tend to like. But as equally erase from their memory bands that really went astray in the hunt for more gain…So who can blame me for disputing that all AOR bands are better only to shit, when I remembered the Def’s? Are Poison and Def Leppard the same I think not; and today’s frolicking has many diamonds hidden (e.g. When the Walls Came Tumbling down) rather the world renowned “pour some sugar”, or “love bites”…
So Ladies & Gents we present to you another NWOBHM product that went US AOR in 2 albums….