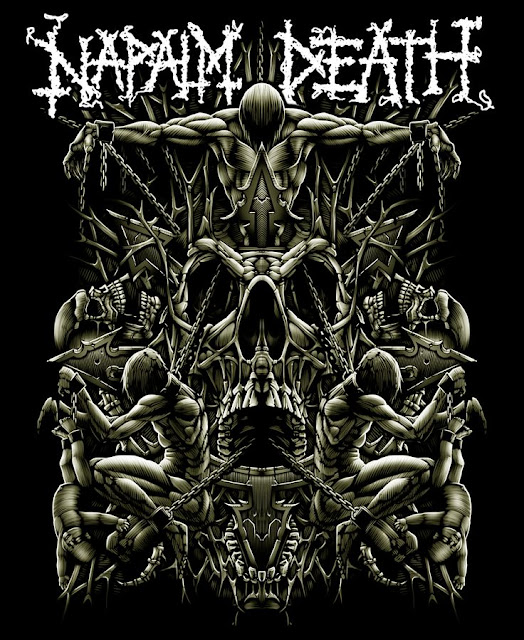 Maybe this suggestion is owed to Scum (press if u wanna hear) the album that managed to give today’s band, a sacred and high positioned place amongst the bands of grindcore (or early Death Metal); or even to the highly regarded 1993 EP Nazi Punks Fuck Off (press if u wanna hear, or press HERE if u want it with Jello) that makes a rather obvious statement (that finds us positively agreeing) covering one of the greats of punk genre.
But it’s not!! Today’s band even though were formed in UK, played original and brutal grind, putting the basis for early death metal development, incorporating political statements in their lyrics and maintained a more of US attitude, sounding and performing like US hardcore bands rather than NWOBHM ones, even though they were founded in early 80’s. So as stated in wiki 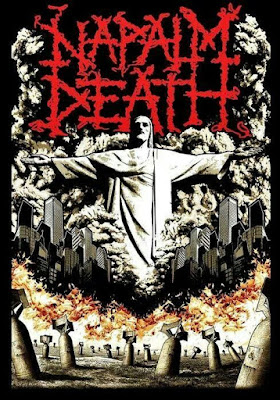 «Napalm Death are a British-American extreme punk band formed in Meriden, West Midlands, England, in 1981.[2] While none of its original members remain in the group, the lineup of vocalist Mark "Barney" Greenway, bassist Shane Embury, guitarist Mitch Harris and drummer Danny Herrera has remained consistent for most of the band's career.
Napalm Death are credited as pioneers of the grindcore genre by incorporating elements of hardcore punk and death metal, using a noise-filled sound that uses heavily distorted, down-tuned guitars, grinding overdrive bass, high speed tempo, blast beats, and vocals which consist of incomprehensible growls, or high-pitched shrieks, extremely short songs, fast tempos, and sociopolitical lyrics. The band's debut album Scum, released in 1987 by Earache Records, proved substantially influential throughout the global metal community.[3] According to the Guinness Book of World Records, their song "You Suffer" is the shortest song in the world, as its length is only at 1.316 seconds long.
Napalm Death have released fifteen studio albums and are listed by Nielsen SoundScan as the seventh best-selling death metal band in the United States.[4]»
So ladies and gents ….
In their top 3 releases:
#1 The Code Is Red...Long Live The Code 2005
#2 From Enslavement To Obliteration 1988
#3 Harmony Corruption 1990
plus Live Corruption!