I’m not posing as expert but I do reckon today’s suggestion as something equally groundbreaking and later on iconic. So I’m leaving it to the experts to share some words (source wiki)


We’ re talking about «a hardcore punk band, formed in 1980 in Washington, D.C. and disbanded in 1983. The band was relatively short-lived, but had a strong influence on the hardcore punk scene, both stylistically and in establishing a "do it yourself" (DIY) ethic for music distribution and concert promotion. Minor Threat's song "StraightEdge" became the eventual basis of the straight edge movement, while the band often professed their own "straight edge" ideals.[1]
The lyrics of the song call for abstinence from alcohol and other drugs, a novel ideology for rock musicians which initially found a small but dedicated following. Other prominent groups that subsequently advocated the straight edge stance include SSDecontrol and 7Seconds.
Another Minor Threat song from the second EP, Out of Step, further demonstrates the belief: "Don't smoke/Don't drink/Don't fuck/At least I can fucking think/I can't keep up/I'm out of step with the world."

AllMusic described Minor Threat's music as "iconic,"[2] and noted that their groundbreaking music "has held up better than [that of] most of their contemporaries."[3] 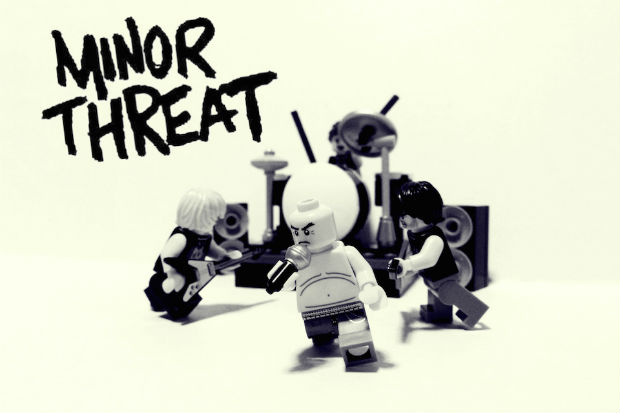 Along with the fellow Washington, D.C. hardcore band Bad Brains and California band BlackFlag, Minor Threat set the standard for many hardcore punk bands in the 1980s and 1990s. All of Minor Threat's recordings were released on Ian MacKaye and Jeff Nelson's own label, Dischord Records. The MinorThreat EP and their only full-length studio album Outof Step have received a number of accolades and are cited as landmarks of the hardcore punk genre.[4][5]


Vocalist Ian MacKaye and drummer JeffNelson had played bass and drums respectively in TheTeen Idles while attending Wilson High School. During their two-year career within the flourishing Washington D.C. hardcore punk scene, The Teen Idles had gained a following of around one hundred fans (a sizable amount at the time), and were seen as only second within the scene to the contemporary Bad Brains.[6] MacKaye and Nelson were strong believers in the DIY mentality and an independent, underground music scene. After the break-up of The Teen Idles, they used the money earned through the band to create Dischord Records, an independent record label that would host the releases of The Teen Idles, Minor Threat, and numerous other D.C. punk bands.[7]


Eager to start a new band after The Teen Idles, MacKaye and Nelson recruited guitarist Lyle Preslar and bassist BrianBaker. They played their first performance in December 1980 to fifty people in a basement, opening for Bad Brains, The Untouchables, Black Market Baby and S.O.A., all D.C. bands.[6]
The band's first 7" EPs, MinorThreat and In My Eyes, were released in 1981. The group became popular regionally and toured the east coast and Midwest. 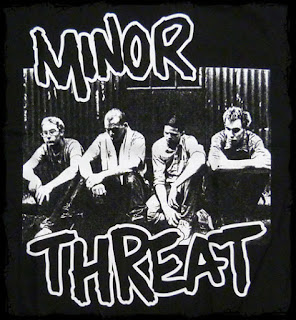 The "I" in the lyrics was usually only implied, mainly because it did not quite fit the rhythm of the song, like the version on the 1984 album Minor Threat. The version on Out of Step is slower, allotting a bridge where MacKaye explains his philosophy of straight edge, explaining that straight edge "is not a set of rules; I'm not telling you what to do. All I'm saying is there are three things, that are like so important to the whole world that I don't happen to find much importance in, whether it's fucking, or whether it's playing golf, because of that, I feel... (chorus)". Some of the other members of Minor Threat, Jeff Nelson in particular, took exception to what they saw as MacKaye's imperious attitude on the song.[8]
Minor Threat's song "Guilty of Being White" led to some accusations of racism[by whom?], but MacKaye has strongly denied such intentions and said that some listeners misinterpreted his words. He claims that his experiences attending Wilson High School, whose student population was 70 percent black, inspired the song. There, many students bullied MacKaye and his friends. Thrash metal band Slayer later covered the song, with the last iteration of the lyric "Guilty of being white" changed to "Guilty of being right." In an interview, MacKaye stated that he was offended that some perceived racist overtones in the lyrics, saying, "To me, at the time and now, it seemed clear it's an anti-racist song. Of course, it didn't occur to me at the time I wrote it that anybody outside of my twenty or thirty friends who I was singing to would ever have to actually ponder the lyrics or even consider them
so ladies and gents here you have it