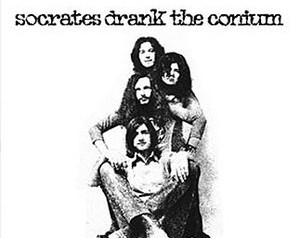 Friday used to be my favorite day because obligations used to end and the weekend was to come… But now, seems that Friday is a new start for a weekend of a further more try. On this note I should go on an inwards approach. With today’s band its not like we discover America or something… but I surely know that for whoever haven’t heard about Greek prog of the 70’s (with gr lyrics or not) today’s band will be some kind of rediscovering routes always thought and perceived as well established exclusively on western hemisphere. 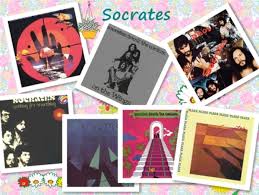 The rest comes from the experts (to b somehow scientific and accurate enough): «Socrates Drank the Conium, known also as Socrates, is a Greek rock band that formed in 1969[1] and achieved success in the 1970s. Influenced by heavy blues and rock bands like The Jimi Hendrix Experience and Cream, the band melded the unorthodox time signatures and orchestration of progressive rock and the intensity of blues and hard rock music, creating a unique sound that distinguished them from other Greek rock acts of that period. Outside Greece, Socrates is best known for Phos (Greek for Light), their 1976 landmark collaboration album with Vangelis.
The group has gone through many lineup changes, but the two core members have remained: guitarist Yannis Spathas and bassist/singer Antonis Tourkogiorgis
In 1975, Socrates went through a change in stylistic direction with Phos, which featured Vangelis' production and contributions on many tracks.[3] Phos was mostly reworkings of older songs by Socrates. Both LPs On the Wings and Phos were issued in the USA via Neil Kempfer-Stocker's Prog imprint Cosmos.
In 2002 Socrates reunited in an extended form (featuring keyboards and a second singer) to do several shows around Greece. This lineup remains active.
Socrates began its career in the clubs of Athens, most prominently the popular Kyttaro.[2] They were present at a number of other locations in and around Victoria Square in Athens. In addition to performing originals, Socrates often covered Jimi Hendrix songs, none of which were featured on any studio releases; a thirteen-minute cover of "(I Can't Get No) Satisfaction" by the Rolling Stones, however, found its way onto their 1972 album Taste of Conium.» (source wiki)
And as ACIDFUZZER quotes on his rating in rateyourmusic.com: «If you consider yourself a «heavy prog connoisseur of the 70's" stop praising overrated tiring bands like Uriah Heep (for God’s Sake no!!) or Atomic Rooster and grab a copy of this masterpiece!»

Curious enough??
Let me present a well known ancient philosopher playing the blues quite intellectually, a.k.a.
The 70’s plus Live!

Related Greek Prog (for other links see above)

Related Artists (that aren't mentioned above)