Today I was really torn… wanting to post something brutal and awesome I thought about Benton’s vehicle…But not! There are anti-Christians with a cause (see below) and a heavier (!!) attitude about it, than the brandings and other poser’s tricks to seem darker from what is playing… The fact that my good friend Chris (X-sickness) suggested them, give them the necessary push… It’s fierce and provocative enough!! 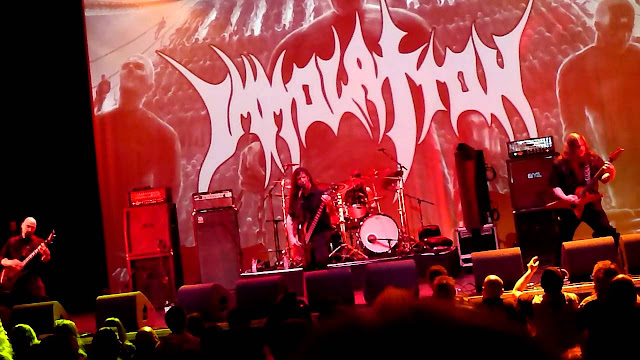 It’s better to leave it to the analysts to sum today’s suggestion up:  «Immolation is an American death metal band from Yonkers, New York, United States», originally formed in May 1986 even though their first awesome debut released 5 years later. The band «relies on riffs written in dissonant harmonic patterns, often dueling between the two guitars, to progress songs, typically over complex rhythm and drum patterns.[5] Their riffs are often a mixture of fast tremolo picking and a lot of power chords and pinched harmonics to lay down a wall of sound that many bands have tried to use in their own music. Their guitar parts are often highly complex and technically proficient. Drum parts are often written to follow the guitar riffs in a way that is unusual for most death metal. They and fellow Pennsylvania death metal band, Incantation, helped bring the New York death metal scene to the attention of the underground.[5] The debut album from them is frequently cited as being an important and highly influential album, having laid down the blueprint that bands such as Cryptopsy and Suffocation would follow with their respective debuts.[6]
The band's lyrics from Dawn of Possession to Unholy Cult are largely anti-religion, especially anti-Christianity.[5] Beginning with Harnessing Ruin, there are more lyrics touching on other subjects such as politics. As Ross Dolan explained, the band's shift in lyrical theme was motivated by current events:
We did kind of leave the religious themes alone, because we were very passionate about that for the first number of records. And once Unholy Cult came out, that was where we branched off. That's where the shift happened, 'cause that was right after 9/11 (see the rest of Moore Here), as you know! I saw it, I went down there, I had family that got killed in the towers, and it was a life-changing event in a lot of ways. And I knew at that point that things would never be the same, in our country or in the world. And that's where the shift happened, and we started to focus more on the darker side of humanity. Which we did already with the religious themes, of course, because that was a very dark part of our history. I mean not to knock anybody who's very passionate about their religion, but in my personal point of view, I've always thought of it as a very controlling and negative force. It serves as a division in our world, it divides people, just like so many other things! So that's where we are, and that's where that shift started, away from religion and into something more socially relevant and looking more deeply at ourselves.[8]»