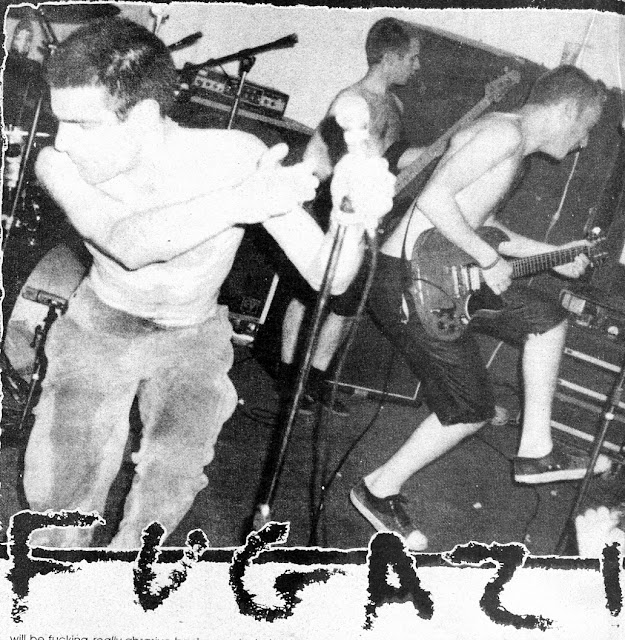 It is this time of the week that we get political, high pitched and super speedy fast. Today’s band though, need a more informative piece on its achievements, not only amongst its peers, but in the whole wide Rock world, than my ramblings that apart from not being an expert or a fan even, I can’t help but admire this particular band and respect it as much I have, classic icons of this genre…


So it is better to leave it to the experts (wiki) to analyze today’s band influence and heritage. Today’s band «is an American post-hardcore band that formed in Washington, D.C. in 1987. The band consists of guitarists and vocalists Ian MacKaye and Guy Picciotto, bassist Joe Lally and drummer Brendan Canty.
Fugazi are noted for their DIY ethical stance, manner of business practice,[1] and contempt towards the music industry.[2]
Fugazi have performed numerous worldwide tours, produced six studio albums, a film and a comprehensive live series, gaining the band critical acclaim and success around the world.[3] Fugazi has been on indefinite hiatus since 2003.
Fugazi are primarily a post-hardcore band.[37] The band has also been involved with playing indie rock,[38] art punk[39][40] and experimental rock.[41] Fugazi's music was an intentional departure from that of the hardcore punk bands the members had played in previously. Though clearly rooted in punk and hardcore, there is arguably more than punk to be found in Fugazi's music. Fugazi incorporated funk and reggae beats, irregular stop-start song structures, and heavy riffs inspired by popular rock bands such as Led Zeppelin and Queen, bands that the punk community of the time largely disdained.[42]
Picciotto became the group's second guitarist when he realized MacKaye's typically chunky, low-end riffs and Lally's dub-influenced basslines allowed him to focus on high-pitched parts. In both vocal and guitar roles, Picciotto assumed the role of a foil to MacKaye; employing a Rickenbacker guitar for its scratchy single-coil sound in order to "cut through MacKaye's chunky chording like a laser beam."[10] Picciotto's assumption of guitar duties allowed all four members of the band to jam together and write songs that way, where previously they had played songs largely as MacKaye had arranged them.[43] When writing songs, the band often rearranges them with different structures and different singers.[3] Spin Magazine has listed MacKaye and Picciotto together at No. 86 on their list of The 100 Greatest Guitarists of All Time for their unique and interlocking guitar style in Fugazi.[44]»
So we give to you
the Legacy releases (By Ranking)
The Repeater (1990), The Argument (2001), In on the Kill Taker (1993), Red Medicine (1995) & End Hits (1998)