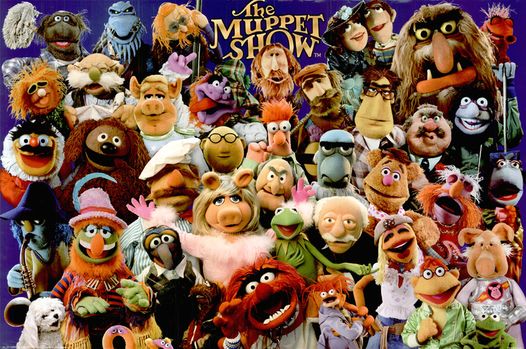 No introduction required for this one…. So I’ m letting the authorized sources to introduce today’s retro reference
The Muppet Show is a family-oriented comedy-variety television series that was produced by puppeteer Jim Henson and features The Muppets. After two pilot episodes produced in 1974 and 1975 failed to get the attention of America's network executives, Lew Grade approached Henson to produce the programme for ATV's ITV franchise in the United kingdom. The show lasted for five series consisting of 120 episodes which were first broadcast in Britain between 5 September 1976 and 15 March 1981 over ATV and syndicated to local broadcast stations elsewhere. The programmes were recorded at ATV's Elstree Studios just north of London.
The series shows a vaudeville or music hall-style song-and-dance variety show, as well as glimpses behind the scenes of such a show. Kermit the Frog stars as a showrunner who tries to keep control of the antics of the other Muppet characters (and his temper), as well as keep the guest stars happy.[1] The show was known for outrageous physical slapstick, sometimes absurdist comedy, and humorous parodies.[2] Each episode also featured a human guest star. As the show's popularity rose, many celebrities were eager to perform with the Muppets on television and in film. (Source Wikipedia)
The following compilation is as filed in muppets wiki and it holds 2 bonus surprises (a waldorf & statler compilation of season one, plus muppets 1st movie!!)