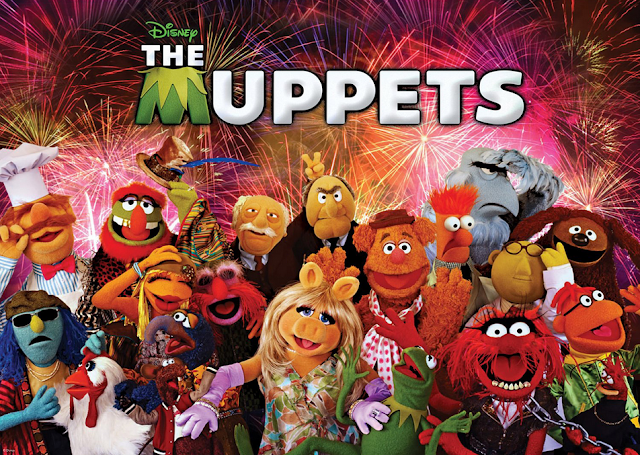 Well I know that some of you would expect the follow-up of the girls saga. But having seen what the lawful copyright fighters have done with our original retro post about our beloved Muppets, Kokdi thought that it is time for a reload section compiled with the official videos that surely maintain the frolic charisma of its characters while the originality in all the tunes they revise is both interesting and funny and is always worthwhile watching.

Nevertheless we must now introduce (because some historic references are mentioned in the original homage post; see below) the main characters that we will appreciate on all videos below:
First of all our beloved Waldorf & Statler: «Statler and Waldorf are a pair of elderly Muppet characters known for their cantankerous opinions and shared penchant for heckling. They share the stage left balcony box in The Muppet Theatre, and the two delight in heckling every aspect of The Muppet Show. Waldorf is the one with the pug-like face, mustache, and whiter hair. In almost all productions, Statler appears on the audience's right and Waldorf on the left. A helpful mnemonic is that Waldorf has the wide face. They first appeared as a pair in the 1975 pilot The Muppet Show: Sex and Violence. On the Muppet Show, they usually have the last word, with a final comment at the end (except for episodes 123, 217, 314, and 515), and are especially unforgiving to Fozzie Bear. However, it is revealed in A Muppet Family Christmas that the two critics were friends with Fozzie's mother, Ma Bear. 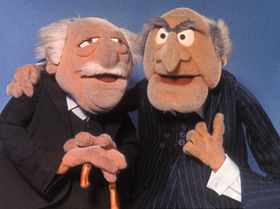 On the first season of Muppets Tonight, Statler and Waldorf are seen watching the show from the living room of what appears to be a retirement home. In the second season, they watch the show on a portable television from various locations, including a golf course and a ski lift.
In The Muppet Christmas Carol, they play the ghosts of Scrooge's business partners, Jacob and Robert Marley. In Muppet Treasure Island, Statler and Waldorf are the Figurehead of the Hispaniola. In The Muppets' Wizard of Oz, they appear as the Kalidah Critics, strange beasts who shout insults at anyone attempting to cross a treacherous bridge.
From 2005-2006, Statler and Waldorf starred in a bi-weekly online series, From the Balcony, on the website Movies.com. In the series of short videos, the crotchety pair dished on the latest movie releases. the duo take on a featured role in The Muppets sharing the fine print of the Muppet contract with villain Tex Richman. Of Course Stalter & Waldorf don't realize that Tex plans to raze Muppet Studios and drill for oil, which would mean the end of their balcony - and their heckling 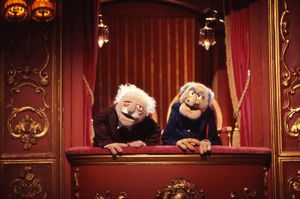 In Muppets Most Wanted, they travel with the Muppets watching their touring show. And they say Miss Piggy's performance of the Macarena has made the show even worse, managing the impossible.» 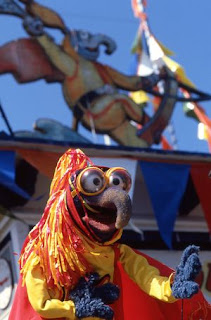 For Gonzo: «Gonzo, formally known as "The Great Gonzo" or "Gonzo the Great," is the resident daredevil performance artiste on The Muppet Show. He is an odd looking, unclassifiable creature with blue fur, bug eyes, and a long crooked nose. He takes pride in his uniqueness and enjoys everything that he does -- no matter how painful or ill-advised it may be.
Originally introduced as a frustrated performance artist, Gonzo would perform bizarre avant-garde acts such as demolishing a car with a sledgehammer to the tune of the Anvil Chorus.  Such acts nearly always ended with the audience booing him off the stage. 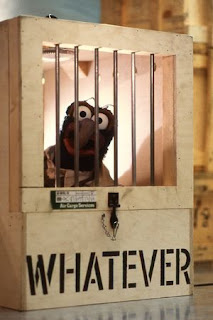 The notion of Gonzo, as a character who performs terrible acts but considers them artistic, was devised by Jerry Juhl. As Dave Goelz recalled, the character might have been forgotten were it not for Jack Burns, the show's original head writer, who during an early meeting suggested Gonzo perform "these crazy acts like eating a tire to 'Flight of the Bumblebee!'" So, in the show's first episode, Gonzo did exactly that, and the character grew from there.[1] Burns also coined the character's name.[2]»
For Beaker: «Beaker is the hapless assistant to Dr. Bunsen Honeydew. He is a Live-Hand Muppet who made his first appearance in Muppet Labs sketches during the second season of The Muppet Show. Kermit the Frog describes Beaker by saying "If somebody has to get hurt, it's almost always Beaker."[1] 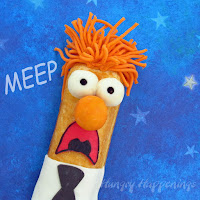 Prior to Beaker's debut, Dr. Honeydew appeared in Muppet Labs segments by himself, but the timid assistant added a new level of comedy to the sketches. Dr. Honeydew's experiments and inventions always seem to go awry, and Beaker is their perpetual victim. He has been shrunk, cloned, punched, deflated, zapped, turned invisible, and blown up, but he always comes back for more.

On The Muppet Show, Beaker has sung "Feelings" and, accompanied by The Swedish Chef and Animal, "Danny Boy."» 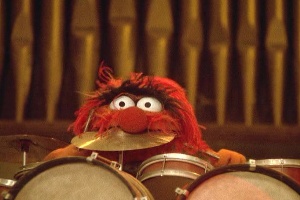 And finally for our beloved ANIMAL: «Animal is the wild drummer on The Muppet Show, performing with Dr. Teeth and the Electric Mayhem. Animal is a crazed percussionist with three styles of music -- loud, louder, and deafening. He speaks in a guttural shout, often repeating a few simple phrases, such as "BEAT DRUMS! BEAT DRUMS!" or "WO-MAN!" In relatively calmer moods, he is capable of more coherent conversation, but these instances are infrequent.
Animal first appeared in the 1975 pilot, The Muppet Show: Sex and Violence, chained up in a basement cell when he wasn't onstage performing with the Electric Mayhem. He later became a main character on The Muppet Show, and his unrestrained style has made him popular with young people for decades. 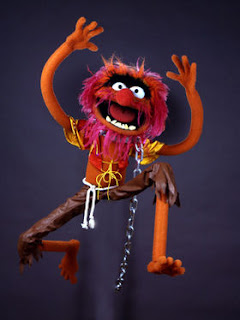 Frank Oz says that he had his character down to five words: Sex, sleep, food, drums and pain.[1] Occasionally, two of those essentials, food and drums, are interchangeable. In The Muppet Movie, Dr. Teeth had to remind Animal to beat, and not eat, his drums. In The Muppet Show episode 110, when asked by Kermit if he preferred drumming to food, Animal replied that drums are food.
Animal's wild attitude can be compared to Cookie Monster. In A Muppet Family Christmas, after observing Cookie Monster eating all of Janice's cookies in his signature manner, Animal comments, "That my kind of fella!"
Animal's family life is generally non-existent, and outside of the band, the Muppet Show troupe, and women in general, he has no other relationships. A significant exception is depicted in the book The Case of the Missing Mother, which reveals the existence of Animal's mother, LaVerne. LaVerne is also a drummer, and it's implied that percussion skills are a family trait. 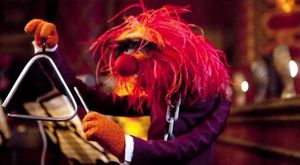 It is a popular legend that Animal was inspired by Keith Moon, the wild drummer of the Who.[2][3] Mick Fleetwood of Fleetwood Mac is also sometimes cited as the inspiration for Animal.[4] However, there is no evidence in the original sketches for the character that suggest that he was based on anybody in particular.
Three of the other members of the Electric Mayhem were created by Muppet designer Michael K. Frith, and the sketches reproduced in the 1981 book Of Muppets and Menshow that they were based on famous musicians. Dr. Teethis a cross between Dr. John and Elton John; Sgt. Floyd Pepper is based on the Beatles' Sgt. Pepper album, and the original concept for Janice was a skinny, long-haired male character based on Mick Jagger. Animal, on the other hand, was designed by Jim Henson, and the rough sketch (also seen in Of Muppets and Men) doesn't appear to be related to any real musician. 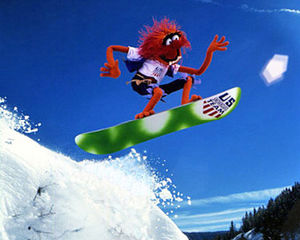 However, it's not surprising that Animal is often compared with famous drummers -- as Buddy Rich said in his Muppet Show episode, "All drummers are animals." Animal himself considers Rich one of his musical influences, along with Gene Krupa, Keith Moon of The Who, and Ginger Baker of Cream and Blind Faith.[5] The actual drumming for Animal was performed by Ronnie Verrell, a veteran drummer and member of Jack Parnell's house band for The Muppet Show.»
The chain goes on and on so be sure to dive through our sources (MuppetsWIKI) deep enough for a closer look to all weirdoes that makes a notorious and time – lasting favorite TV show as.. 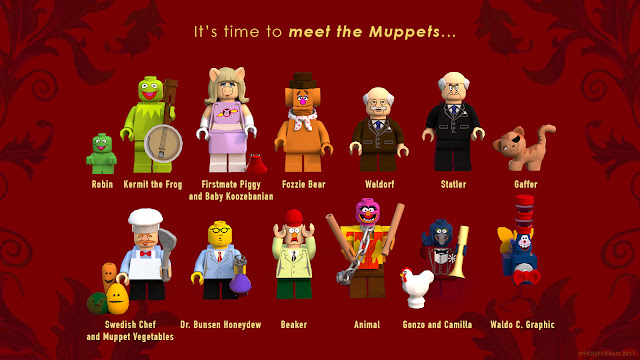