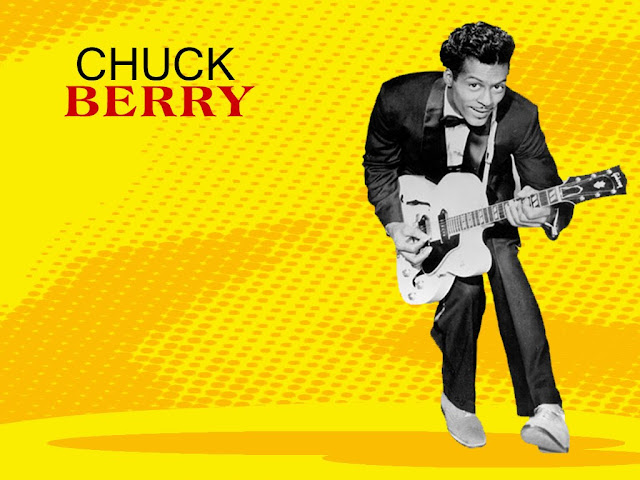 Well folks, since we were getting started, it’s of no use to ignore the great musician who completes the top 25 artists as u see it in the list on your right. You’ve guessed it right. If u press on those links u will see what Kokdi chose for u in order for him to pay his homage the way he thinks fit.
So completing the task at hand today’s turn – and late that is – is going to be one of the greatest guitarists ever played a tune for the masses. Many will argue preffering personalities as Hooker or King or even Hendrix for that matter. But listening closely to the opening riff of the most classic guitar song of all times u will find out that this particular opening is the one that maybe overshadowed his true potentials but gave him instead an instinctive trademark sound of ALL r’n’r anthems from then on.

Let us see what «the source» (Wiki) has to say: «A pioneer of rock and roll, Berry was a significant influence on the development of both the music and the attitude associated with the rock music lifestyle. With songs such as "Maybellene" (1955), "Roll Over Beethoven" (1956), "Rock and Roll Music" (1957) and "Johnny B. Goode" (1958), Berry refined and developed rhythm and blues into the major elements that made rock and roll distinctive, with lyrics successfully aimed to appeal to the early teenage market by using graphic and humorous descriptions of teen dances, fast cars, high school life, and consumer culture,[2] and utilizing guitar solos and showmanship that would be a major influence on subsequent rock music.[1] His records are a rich storehouse of the essential lyrical, showmanship and musical components of rock and roll. In addition to the Beatles and the Rolling Stones, a large number of significant popular-music performers have recorded Berry's songs.[2] Though not technically accomplished, his guitar style is distinctive—he incorporated electronic effects to mimic the sound of bottleneck blues guitarists and drew on the influence of guitar players such as Carl Hogan,[62] and T-Bone Walker[2] to produce a clear and exciting sound that many later guitarists would acknowledge as an influence in their own style.[56] Berry's showmanship has been influential on other rock guitarists,[63] particularly his one-legged hop routine,[64] and the "duck walk",[65] which he first used as a child when he walked "stooping with full-bended knees, but with my back and head vertical" under a table to retrieve a ball and his family found it entertaining; he used it when "performing in New York for the first time and some journalist branded it the duck walk."[66][67] 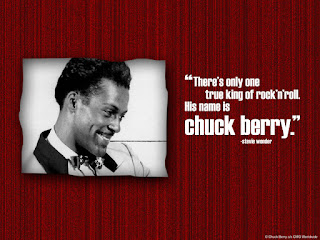 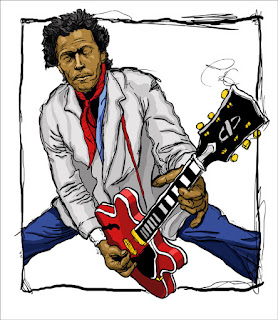 The journalist Chuck Klosterman has argued that in 300 years Berry will still be remembered as the rock musician who most closely captured the essence of rock and roll.[81]
Berry was among the first musicians to be inducted into the Rock and Roll Hall of Fame on its opening in 1986; he was cited for having "laid the groundwork for not only a rock and roll sound but a rock and roll stance."[5] Berry is included in several of Rolling Stone magazine's "greatest of all time" lists; he was ranked fifth on its 2004 list of the 100 Greatest Artists of All Time.[6] The Rock and Roll Hall of Fame's 500 Songs That Shaped Rock and Roll includes three of Berry's: "Johnny B. Goode", "Maybellene", and "Rock and Roll Music".[7] Berry's "Johnny B. Goode" is the only rock-and-roll song included on the VoyagerGolden Record.[8] »
So Ladies and gents here u have it (ranking #7 @MyTOP100List) Mr.

With his 2 first albums plus the infamous from St. Luis to Liverpool and a 40 list compilation (the great 28+), plus a couple of legendary live performances