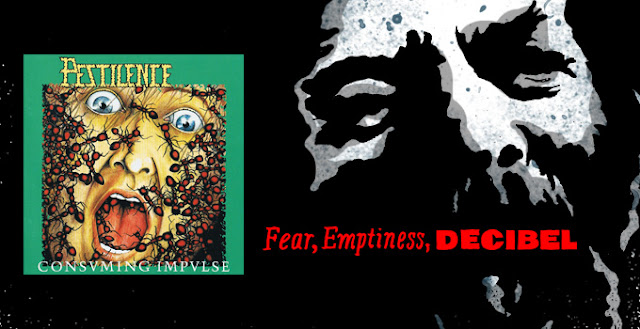 This Week I guess I’m starting with something powerful, yet with the same major dilemmas other suggested band had in the recent Kokdi’s suggestions (e.g. Discharge, Trouble). Started off as imaginative thrashsters these guys from Holland, managed to turn into something of a Coroner of Death Metal. The transformation is fully shown in today’s post 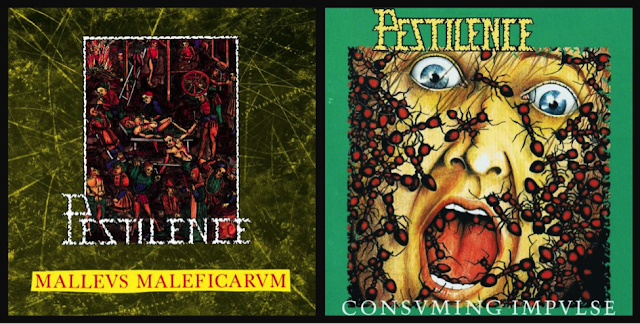 Enough with the ramblings let’s stick with the facts: «Pestilence started in the Netherlands in the mid 1986 as a thrash metal band. The lineup, consisting of Patrick Mameli (guitar, vocals), Randy Meinhard (guitar), and Marco Foddis (drums), recorded two demos before gaining the attention of Roadrunner Records. After the first demo, Martin van Drunen (bass, vocals) joined them. These two demos - Dysentery (1987) and The Penance (1987) - are raw, sounding mostly like a cross between Possessed and Schizophrenia-era Sepultura. After signing with Roadrunner, Pestilence released their debut album, Malleus Maleficarum, in 1988, further refining their approach to thrash metal. The new material was tighter and more focused than the demos.
Meanwhile, Pestilence recruited a new guitar player, Patrick Uterwijk. In 1989, the band released their second album, Consuming Impulse, a turn toward to death metal. Musically, things became heavier and more haunting. Vocally, Martin van Drunen moved away from cleaner vocals in favour of a more acidic growl. With its release, Pestilence gained international attention, and became highly regarded worldwide by death metal fans. But before a follow-up album was released, the lineup changed once again; vocalist and bassist Martin van Drunen departed to front Asphyx. 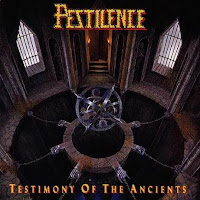 Pestilence were faced again with the challenge of replacing a member, being without a vocalist and bassist. So while recording their third album Testimony Of The Ancients (1991), they enlisted bassist Tony Choy, who at the time was playing with the technical death metal band Cynic and Patrick Mameli took over the vocal duties. With this lineup, they released the album Testimony Of The Ancients. The new material was not as abrasive as the previous albums, but the band's musicianship had obviously grown and the album had the best production job of the band's catalogue.[according to whom?]» The rest of the story remains untold
Ladies and gentlemen the thrash death metallers from Holland