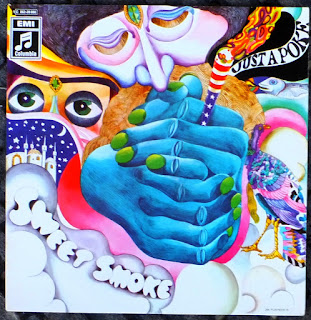 Wanting to switch off from the heavy extreme sound of this month I was practically searching for a band like Sweet Smoke…One of the pioneers of psychedelic rock with jazzy fusion style, that some misinterpret as Krautrock band.[1] (only because the band moved to Europe and Germany in 1969)..
Source Wikipedia:
«Sweet Smoke were a psychedelic jazz-rock band formed in Brooklyn, New York in 1967. The group moved to Europe in 1969, living in Germany, and performing in Germany, Holland and France until 1974 when the band split up. Initially, some members stayed in Europe, some went to India, but most of the band returned to the United States.

Noted for their buoyant rhythms, inventive improvisations and complex musical structures, in interviews, the group says their music was influenced by Eric Clapton, Jimi Hendrix, Frank Zappa, John Coltrane and The Beatles.[2][3]»


So without any delays the band once called