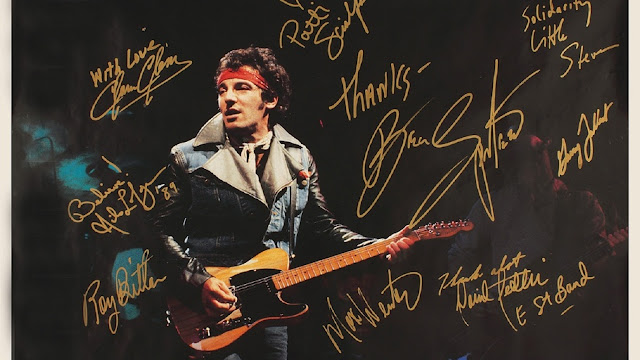 So better late than never as we Greeks always say…it is about time to salute or pay our homage to one of the most classic contemporary American music heroes. To be quite honest he was never a personal favorite. When I was young I kept seeing him right in front of the American flag singing born in the USA and getting endorsements from republicans acknowledging the album’s impact on American youth, which made me kinda sick of the Boss's mainstream influence. Nevertheless and as history proven it wasn’t his intention to write something about how cool it was to be an American. Quite the opposite; his true intention was to show the world how inept was the great US in keeping the working class protected and socially covered as far as schooling or hospitalizing or equal working opportunities goes. Thus he decided from then on when he played this particular song, it was deliberately slowed down, giving the audience a weeping sensation instead of an anthem.

The source (wiki) contributes: «Bruce Frederick Joseph Springsteen (born September 23, 1949) is an American musician, singer, songwriter, and humanitarian. He is best known for his work with his E Street Band. Nicknamed "The Boss", Springsteen is widely known for his brand of poetic lyrics, Americana, working class and sometimes political sentiments centered on his native New Jersey, his distinctive voice and his lengthy and energetic stage performances, with concerts from the 1970s to the present decade running over four hours in length.
Springsteen's recordings have included both commercially accessible rock albums and more somber folk-oriented works. His most successful studio albums, Born to Run (1975) and Born in the U.S.A. (1984), showcase a talent for finding grandeur in the struggles of daily American life. He has sold more than 64 million albums in the United States and more than 120 million records worldwide, making him one of the world's best-selling artists of all time.[3][4] He has earned numerous awards for his work, including 20 Grammy Awards, two Golden Globes and an Academy Award as well as being inducted into both the Songwriters Hall of Fame and the Rock and Roll Hall of Fame in 1999»….«Often described as cinematic in their scope, Springsteen's lyrics frequently explore highly personal themes such as individual commitment, dissatisfaction and dismay with life in a context of everyday situations.[117]
It has been recognized that there was a shift in his lyrical approach starting with the album Darkness on the Edge of Town, in which he focused on the emotional struggles of working class life.[118][119]» 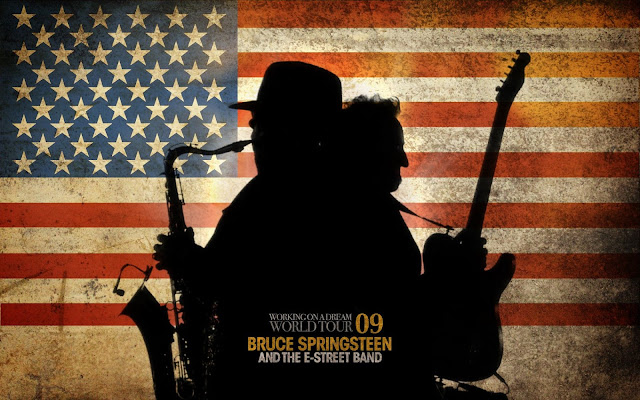 Today we will focus on my personal favorite releases that could sum - up his illustrious career. Luckily for me all the releases are coming from the 1973 – 1982 decade of his career. Starting off with the infamous 2nd album (The Wild,the Innocent & the E Street Shuffle 1973) and kept going with the important releases of years to follow (Born to Run 1975, Darknesson the Edge of Town 1978, The River 1980 and finally the great Nebraska album 1983).
As a user of our beloved rym quotes: «One of the last truly great American singer-songwriters, Bruce Springsteen has built up a deserved reputation for his rustic lyrics, often coupled with the music's rustic beauty (and, in the case of Born to Run, symphonically). Few artists could make such a remakable transition from the hopeful glory of Born to Run to the blatant regret of Darkness on the Edge of Town, and still create timeless pieces of American art. Or make a transition from the acoustic Nebraska to the blown-up bombastic greatness of Born in the U.S.A. But there's a reason that he made all of those albums work.  It's because he never - and has still never - lost sight of his message of big dreams in a big world. Or, as Pete Townshend once said:  "When Bruce Springsteen sings, that's not 'fun', that's fucking triumph." In your face, John Mellencamp!»
So ladies & gents Kokdi proudly presents a true working class hero with a musical intelligence that could only be matched (music – wise) by Joe Strummer, and currently is ranking #36 @ my TOP100List, having the super - cool pseudo name The Boss a.k.a.

John Lennon (TBA for now settle with his Liverpool Band)